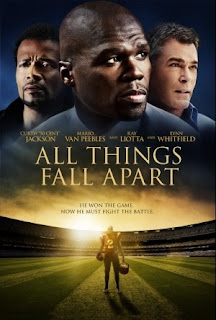 So just when I thought I had seen it all in a motion picture I was pleasantly surprised when I pulled up All Things Fall Apart starting Curtis "50 Cent" Jackson as a Heisman hopeful who suddenly falls ill and has his entire world destroyed.  In the first 15 minutes, I wasn't sure what to expect as 50's character Deon presented himself as an ego driven jock running a rampage on a college campus.  I quickly found myself detesting Deon and his interactions with his younger brother reinforced my disdain for his personality.  Then, Just as I was about to check out and look for another movie, a turn for the worst was made and I was pulled back in.


I have to give the writers a huge high five as they forced moviegoers on a character development rollercoaster beginning with hatred and ending with adoration.  Even though 50 was surrounded by some of the most well known names in black Hollywood like Mario Van Peebles and Lynn Whitfield, he held his own as Deon physically and psychologically changed right before my eyes.  At the midway point of All Things Fall Apart, I had to force myself to recall his character in the opening scenes as well as the action scenes.

For the softhearted movie goers and former athletes keep the Kleenex close by.  Though this movie is entirely based on fiction I am confident viewers will immediately connect with Deon and his adversity.

The closing scene was a bit corny, but it actually made a bit of sense considering the circumstances.  All Things Fall Apart should receive a definite second look on Netflix and is a great date movie!