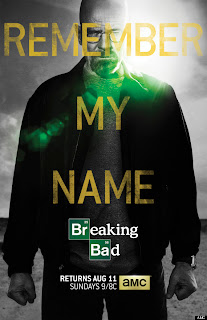 So tonight, I sat on the couch with my Zaxby's Wings and Things waiting for the convenient countdown ticker to hit zeros on AMC.  Breaking Bad, the final episodes!  Let the mayhem begin.

From the moment the opening scene began I was locked in and totally geeked!  If you read my Netflix Second Look review of Breaking Bad a few months back, you'll know I slept on the first four seasons - and just recently caught up on things when Netflix added the fifth season.  Man, I was just in time as the first of the final episodes proved to be intense and foreshadowed what may come for our meth cooking heroes.

Season 5 of Grand Theft Auto the TV Series gave fans the cliff hanger we always knew was coming but to be honest, I was totally blown away by the faceoff that took place when Walt connected the dots and decided to pay Hank a visit at the crib.  I didn't see that coming.