Movie Review: Keeping Up with the Joneses 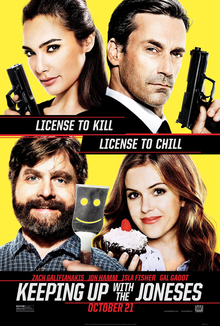 Keeping up with the Joneses is an action comedy/spy thriller that is wildly entertaining yet still has a bit of a dark side - meaning people die and somehow you can't help but laugh as it happens.  It's four main characters are played by Zach Galifianakis, Isla Fisher, Gal Gadot and Jon Hamm and is set in a quaint suburban  cul de sac somewhere in Atlanta, GA.

Galifianakis plays Jeff Gaffney, a straight-laced human resources administrator for a tech company.  He and his wife Karen have just sent the kids off to summer camp and have no clue what to do in an empty house.  All that changes when out of nowhere the house across the street is sold to buyers who have not so much as seen the house in person.  Karen is intrigued by this and starts playing the role of nosey neighbor until one day she detects movement in front of the house.  As she peers through the window, she sees a sexy and slender woman lock lips with a dashing man.

It's been a while since I wrote a movie review so what better way to return to the game than to share my thoughts on Kevin Hart's What Now.  After all, I'm actually a Kevin Hart fan and love how he generates laughs by saying what we are all thinking out loud.  His sarcastic approach has more than become his style, it is a formula that his audience can relate to.  That said, I still had my reservations about What Now; mostly because I was not a huge fan of Let Me Explain.

I felt like Let Me Explain was forced with Kevin referencing familiar material.  He had a few strong moments, but I eventually felt like I was laughing simply because it was Kevin Hart.

What Now? is a different animal.