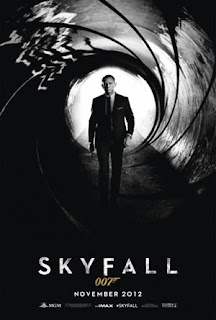 Double-O Seven returns to theaters with Skyfall in celebration of 50 years on the Silver Screen. So what more inopportune time for me to catch my first Bond flick? I know, I know. As much as I like action and beautiful women I never jumped for a Bond film.

But the trailer for Skyfall hinted at my favorite story elements, like 'identity', and I must say Skyfall didn't let me down.

007, James Bond (Daniel Craig) is trying the recover a harddrive with the identities of multiple MI6 agents when the pursuit ends with Bond being assumed dead and declared K.I.A. After being off the grid for months, Bond resurfaces when an attack on the MI6 headquarters leaves 8 operative dead and 5 undercover agents outed via Youtube. Bond tracks down his foe from Turkey in Hong Kong which leads him to Silva (Javier Bardem), a former MI6 agent left for dead by M's (Judi Dench) orders at the hands of the Chinese. Now, Silva is back seeking vengeance by killing and exposing undercover agents, publicly humiliating M as the face of the agency. Bond must overcome his own sense of abandonment in order to stop Silva to save M along with the agency.


The story of Skyfall was inter weaved with care like a 'Dark Knight' script - you really didn't know what was going to happen next. The last thing Bond expected was to be shot and left for dead (No spoiler; it's in the trailer). The incident of friendly-fire from fellow agent, Eve Moneypenny (Naomie Harris), turned into a full blown identity crisis for 007. Skyfall used Bond's physical and mental wounds to delve into his childhood as an orphan.

Bond must resolve his identity crisis while caught in a triangle with M and Silva, who have their own unstable past. As involved as the story was, it felt like the writers were playing it safe to keep the movie on track with action but the drama of Bond, M, and Silva would make for great reading! Nothing was lost in the motion picture, though. 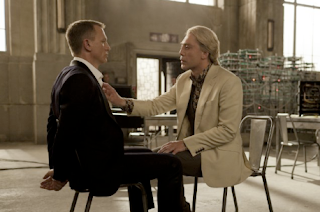 I really kicked myself for not checking out Bond flicks before Skyfall but this seemed like new territory for the Bond character that I've heard of. James Bond in Skyfall was vulnerable, took missteps, but ultimately recomposed himself as the undeniable bad ass (I heard) he is. If this is Daniel Craig's James Bond in Casino Royale and Quantum of Solace then I truly did miss out!

Movie Moment of Zen:
"The whole office goes up in smoke and that bloody thing survives..." - Bond. James Bond.