Kendrick Lamar dropped his 4th major release, DAMN., on Good Friday - shout out to my Facebook timeline. Admittedly, Kendrick Lamar is the best MC in the game right now...but I am not a fan so my music library rolled into Good Saturday short on 1 Kendrick Lamar album.

Whoa, wait! Now, I'd still bump some tracks on repeat like Swimming Pools (Drank), Bitch Don't Kill My Vibe (Remix), Alright, King Kunta. But they're at the very bottom of my playlist after running through Killah Priest, Spark Master Tape, Cousin Stizz, KiD CuDi, and even Drake. And those aren't comparisons, or even rankings, just the vibe I like to catch that Kendrick just doesn't capture for me. And then Kendrick dropped 'HUMBLE.' and it was hot garbage. Trash. 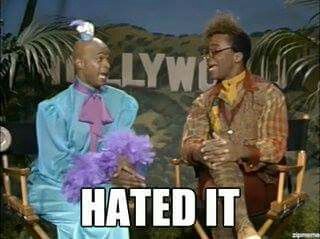 But, at the urging of my Facebook timeline, I gave 'DAMN.' a chance and, well, DAMN! This is the 1st Kendrick album that I've actually listened to more than twice. Let J tell it, I like "cerebral" music and 'DAMN.' just puts me inside Kendrick's head while 'good kid...mad city' and 'To Pimp A Butterfly' only put me in Kendrick's experiences.

I mean, I could sit here and quote lines to you that you already know from songs that you already repeat or just simply say that 'DAMN.' felt good! Albums like this is what I listen to while on the bike on a bright, sunny day. Or in the car with the windows down, sweating at the stop light while letting everybody hear all that sauce . Right now I'd say it's already the soundtrack of the summer and probably Album of the Year. Then to boot, 'DAMN.''s production felt like it had a Dungeon Family/Organized Noize feel to it at times. And I just knew that Andre 3000 was going to have a feature on the track, PRIDE.

HUMBLE. is still garbage, tho.

I'm glad I gave this album a go because the 3rd time's a charm, right? Well, Kendrick hit a homerun with 2 strikes against him, in my book (I never checked out Section 80, life goes on).

Did I mention that 'HUMBLE.' is hot garbage?