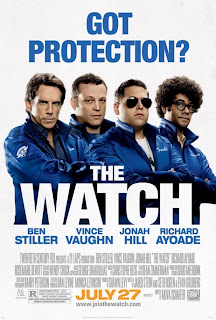 First I'd like to give kudos to 20th Century Fox for amending the original movie title "Neighborhood Watch" to "The Watch" in sensitivity to the Trayvon Martin case.


I checked out the watch opening night largely due to it starring Richard Ayoade of the British Comedy 'I.T. Crowd' fame. Otherwise I normally catch Ben Stiller movies on premium cable channels.


Evan (Ben Stiller) starts a neighborhood watch in response to a security guard's murder and Bob (Vince Vaughn), Franklin (Jonah Hill), and Jamarcus (Richard Ayoade) randomly join Evan to, well, just have something to do - it's a comedy, remember? And in comedic fashion, Evan stumbles on the tail of the killer who turns out to be one of a small hive of aliens plotting a take over the earth. Hilarity ensues as the watch has just hours to stop the invasion and save their own personal strained relationships, as if saving the world wasn't enough

The movie was pretty straight-forward with a decent sub-plot and the collective funny bone of the 4-some made for a good comedic team even with the new face of Richard Ayoade. Even with an R rating the movie wasn't terribly vulgar despite some sexual humor. I really think I could watch it with my mother without her asking me, "why is that funny to you?" (No reason, mom, no reason at all). I saw the movie with a woman-friend who said she enjoyed it but I'll stop short of recommending The Watch as a date movie unless you know she has 'Zoolander' in her dvd collection otherwise stick with the new Ice Age movie.

Back to Richard. Richard plays 'Moss' on Britain's 'I.T. Crowd' show with a trademark parted afro and I saw a lot of 'Moss' in Richard's 'Jamarcus' character but I can't say I'm surprised or disappointed since they're both comedic characters. But I am interested to see what other types of roles he'll play in the U.S. market and see some more things from him as an actor.

Speaking of which, when did "Gangsta" Rap become the defacto movie score choice of suburban comedies? And it actually works! Interesting.

I contributed this post to My WSE TV, the way tv watching should be!

Disclaimer: I'm an employee of Turner Broadcasting, a division of Time Warner,however the views expressed in this post are of my own.
Posted by Steve