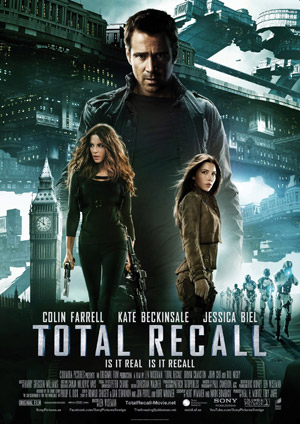 So the title of this review is pretty cliché and I can only imagine how many other movie critics will use similar phrasing to describe their Total Recall [2012] experience. For me, it is simple – as a fan of the original Total Recall [1990], I, like many children of the 80's counted down the days to see what the remake had to offer.
To say it was an edge of my seat thrill ride is an understatement and ultimately, I also feel that the non-stop action seemed to spell doom for this particular flick.

But any true geek that is at least 30 years old should understand every reference I just made and get a solid idea of where I am heading. The movie takes place well into the future where humanity is forced to live on two continents, which leads to overcrowding and actually offers a great justification as to why population centers sprawl vertically. Additionally, within the first few minutes of the movie, “The Fall” is introduced and basically foreshadows how future events and action scenes may play out.

Colin Farrell does a decent job playing himself – I mean reprising the role of Douglas Quaid/Hauser who, in this version of the movie, is simply an assembly line worker hoping to find purpose in his life. He eventually turns to Recall to implant memories so he can at least pretend to do something meaningful with his life and as expected, all Hell breaks loose only moments after visiting the Recall facility.

As expected, Kate Beckinsale makes domestic violence look so freakin hot in her role as Lori Quaid. Unlike the 1990 Lori, played by Sharon Stone, this femme fatale's prowess was much more convincing on screen and did I mention how freakin hot she looked! They even managed to sneak in a flash of panty-covered booty. Oddly enough, as the movie wore on, it was noticeable that the sexpot angle wasn't really played up, so basically...burn in that first booty shot because the human eye probably won't be quick enough to catch it any more once the action picks up.

As for the action, this movie is chock full of it, to a fault. Describing the pacing of the movie is kinda like the fake happy face you make on Christmas morning when you open a gift that you already have, and the person that gave you the duplicate gift is on the edge of their seat staring you in the face. The action is frantic throughout the entire movie and just when you think something big is about to happen to take the action over the top, it simply doesn't happen - think of a dry heave or premature ejaculation and you get the idea. Visually, the action pieces are huge and place human bodies, robots, buildings and vehicles in all kinds of crazy situations that action aficionados will enjoy, but ultimately each sequence leaves you with an empty feeling, forcing you into fake happy smile land. 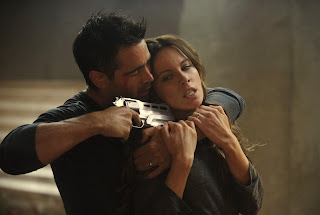 By now, you are probably wondering – why no mention of Jessica Biel? Well, as much as I love J. Biezy, she just didn't do it for me in this film. She felt more like a third-wheel as apposed to a leading woman and to be honest, she didn't kick much tail. In fact, the first and only time J. Biezy and the freakin hot Kate Beckinsale bumped heads, I was focused on Kate the entire time and pulling for her. The rest of the time, she seems to be playing the distressed damsel as Collin yanked her out of gun fire and kept her from falling to her death a few times. She did however bust a few caps in a key action scene to purge a rooftop of a few baddies, but nothing major and it was totally predictable.

Overall, I enjoyed the subtle references to the original 1990 flick such as the ,“Damn you Cohaagen” line and the three-breasted woman. I also appreciated the fact that attempts were made to ground the Total Recall universe in reality. You won't see eyes popping out of eye sockets in the 2012 version, but you will see a world that has experienced a believable dooms day scenario along with technological advancements that aren't too far off base – especially if breakthroughs in robotics, artificial intelligence and lucid dreaming continue to advance. In other words – it could happen!

If your goal is to end the summer with a big action movie that keeps you on the edge of your seat where things go boom and you actually like the characters, you may have to cross your fingers and hold out for The Expendables 2. If you think Kate Beckinsale is freakin hot and you just can't get enough of her, this is your flick.  Stylistically, it's what a science fiction movie should look like, but it seems to drag a bit and ultimately the action sequences leave you with an empty feeling.