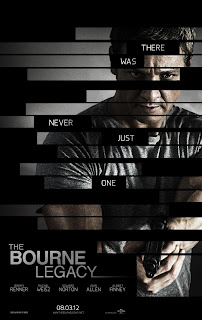 The Bourne Legacy opened this weekend in theaters with a new lead, Jeremy Renner who's quickly becoming one of my favorite action stars with movies like The Avengers, Mission Impossible, and The Town under his belt.
Renner also sharpened his acting chops in Neo Ned, alongside Gabrielle Union, in which he plays a good character role to actually -well-  act. So The Bourne Legacy was a double edged sword of anticipation with a new installment in the Bourne series with Renner as the lead but boy was I disappointed.


There's government pressure on the CIA's black ops programs (plural) which birthed the likes of Jason Bourne and Aaron Cross (Jeremy Renner) due to Jason Bourne exposing the program(s). At the same time, there's an "infection" in the program(s) and their integrity has been compromised so the contingency plan that Eric Byer (Edward Norton) enacts is to "burn the program to the ground". Aaron Cross narrowly misses annihilation prompting him to 1) find out why he was almost killed and 2) viral-out off his program meds and go off the grid for good.

I'm sorry if that synopsis was painfully vague but I really couldn't spoil the movie for you if I tried! This installment introduced a lot of new aspects to the series and left them all as loose ends. Aaron Cross' program, Operation Outcome, uses meds via virus-in-a-pill to enhance mental and physical abilities which have to be taken on schedule. But something happened. The CIA doesn't know in which program, but there's an "infection" which is a greater disaster than the media exposure as a result of Jason Bourne going public. Jason Bourne makes a faceless cameo and is blamed for an assassination - no spoiler - that the movie neither confirmed nor denied was him; one of many loose ends. Another example of an unknotted detail: Aaron Cross - aka Kenneth Kitsom - has history with Eric Byer (Edward Norton), an agent high enough in the CIA to effectively eradicate the largest black ops programs the CIA has ever initiated, but the movie just sort of forgot about their prior history. What did Byer see in Kitsom that turned him into Aaron Cross? These questions need answers! [The movie tells you what made Kenneth Kitsom eligible to become Aaron Cross but Eric Byer had nothing to do with that, but Byer did have something to do with Cross' training.]
To make matters worse, or probably a result of all the unexplained details, the ending was very anti-climatic. With Jason Bourne supposedly "the tip of the iceberg" the CIA unleashed a deadly operative only known as "LARX-03", who was feared and revered like 10 Jason Bournes, to take down Cross but they didn't even so much as lay a hand on each other! I mean come on! No fight? Really? Really? They might as well have played flag football - not even 2 hand touch - to settle things.

I attended the movie with my ace boon coon movie buddy and she shared my sentiments as well so I'm in some company. In looking for answers as to why Legacy was so far from the mark I discovered that the Legacy film was an intentional break from Jason Bourne's story arc because Matt Damon is quoted as saying he would not be in another Bourne movie without Paul Greengrass who directed Supremacy and Ultimatum. That tidbit is the only thing that made sense about why The Bourne Legacy didn't make sense. Film makers attempted to expand and complicate a universe they didn't help create and it showed. Legacy could have at least been a decent movie if it had answered the questions it posed, but it didn't so it really does leave you hanging. It was like a bad Prometheus [And for the record, I thought Prometheus was flippin' awesome!]. Prometheus posed more questions than it answered but it still answered questions - that's all I wanted from The Bourne Legacy, to know what the heck was going on and why.