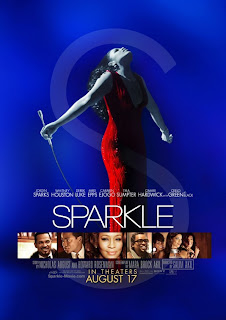 I can think of all sorts of excuses about how I ended up seeing Sparkle [2012]: My mom wanted to see it, Expendables 2 was sold out, it's Black people's version of The Dark Knight etc. But truth be told, I needed "Sparkle" punched on my Black Card. Nope, I didn't see the original despite the hundreds of Sunday afternoons channel surfing right by it but oh, sweet redemption.


Even without not seeing the original, I know Sparkle really doesn't need any introduction but if you didn't know; Sparkle is the tale of a girl with dreams of singing in the limelight but her fear causes her to hide her talent behind her oldest sister, affectionately called "Sister" (Carmen Ejogo). So Sparkle (Jordin Sparks) lives vicariously through Sister performing her songs until she meets Stix (Derek Luke) who encourages her to follow her dream and embrace her talent. Sparkle and Sister enlist Dee (Tika Sumpter) their youngest sister to round out the trio and despite their mother, Emma's (Whitney Houston) warning, the girls pursue singing, each with a different motivation.


Sparkle [2012] is a remake that I heard no grumbling about, instead it had a lot of "it's about time" feelings. The movie is a color-struck man's wet dream with tons of pretty, singing, light skinneded women but I was rather fond of Dee, Sparkle's youngest sister who would flunk a paper bag test. The laughs were very candid, most of them you won't see coming but you will see the episodes of domestic violence coming even without the slow-motion dramatization. The movie score was off the damn chain. With R. Kelly as one of the music supervisors the soundtrack may be something to reckon with. Even though there was a fair share of singing the movie is no where near the "musical" genre which is good because I despise musicals. Also, a quick nod to Jordin Sparks for hitting a note so strong that there was actually aliasing in the theater's digital sound system. [Did I mention I was an engineer/techie nerd?] But the pressing question I have is how long did the sisters think they could hide their singing from their mother when they were performing on cable tv!?

Mike Epps stole the show as Satin, Sister's abusive boyfriend and made for a really good bad guy. Epps didn't play Satin as Mike Epps doing a stand up routine on screen, he was really in character. Sure, Satin was a comedian but only for 2 minutes, he was all bad guy virtually the whole time he was on screen. Sparkle (Jordin Sparks) and Stix's (Derek Luke) #BlackLove was only second to Obama and Michelle, you just had to root for Derek.

I won't call out Director Salim Akil for taking a cue from the movie Love Jones but he could have at least made Jordin Sparks' hair move with a fan. But Akil has a lot to bolster in a relatively short amount of time, he's directed the tv series Soul Food, Girlfriends, and The Game as well as the feature film Jumping the Broom - all since 2003. Sparkle is the first time I've known his name but I'm familiar with his resume so now he's definitely on my watch list as I'm sure more feature films are down the road.

There weren't any fresh faces but rising star Tika Sumpter is definitely taking on quality roles along with Omari Hardwick, playing Levi who gets unrequited love from Sister, migrating from more and more from TV to film led by veteran Carmen Ejogo who has an upcoming role in the Alex Cross movie along side Tyler Perry. And finally, fans get to pay their last respects to Whitney Houston.

Fellas, it's rare a "chick flick" comes around that really isn't a chick flick. I even thumbed through the Man Code twice and couldn't find any violations plus it's Black Hollywood at it's best. Only take girlfriends though, jump offs and side chicks might get ideas. Damn that Derek Luke. Ladies, I think you'll get little resistance on this one because Sparkle [2012] is the best date movie released this summer, hands down.

Movie Moment of Zen:
The entire theater giving Whitney Houston an ovation when she first appeared on screen.

Movie Moment of Ghetto:
The person in the audience who took a picture of Whitney Houston on screen, with flash!