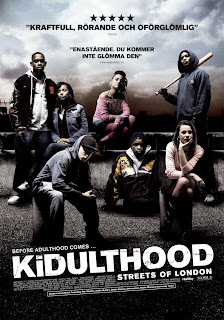 So, the London Olympics 2012 are over, the United States represented and all is well in the world.  Still riding the buzz from the pageantry of the games and beauty of the competition sites, I decided to show my appreciation for the city of London by watching a movie from abroad featuring English actors.  Boy was I in for a surprise when I loaded up the 2006 flick Kidulthood on Netflix.


Initially, I was looking forward to an Attack the Block experience dismissed that expectation quickly when I saw just how grimy the young characters where and even more so when the adults were portrayed as aloof and enabling.  By the end of the experience I learned several valuable lessons: kids in London are off the effin chain!  [This is a stereotype, but after watching this movie...Will Smith voice "Damn!"].  Don't let your kids grow up in London!  [Another stereotype] and parents in London are enabling and need to whup this tails!  [Yet another stereotype].

Good thing none of these stereotypes are true and I would never discriminate against anyone from London, but the point is, I wonder what kids in London are like?

The story is pretty straight forward.  The lead character Trife, played by Aml Ameen, is your typical teen looking for a place to fit in and stand out among his peers.  Unfortunately, the death of a classmate and a few encounters with a neighborhood bully set a series of events in motion that prove to be fatal.  In the meantime, several of his friends and acquaintances embark on separate journeys for sex, drugs and more sex.

Although the movie kept my attention, it doesn't cut the cake when compared to the science-fiction flick Attack The Block.  Any movie where a teenage girl snorts 5 lines of coke, downs several ecstasy pills, knocks of several beers, smokes a few joints and can still go dress shopping needs to execute it's writers and production staff immediately!

Watch on Netflix if you dare.  Otherwise, skip it.  I swear down!  Believe it!

Update:  So Just after writing this article, I discovered that a follow-up titled Adulthood was released in 2008.  Honestly, it looks interesting.  I'll see if I can find it on Netflix and offer my take on it!  See the official trailer below.