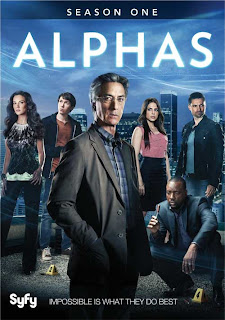 I have to admit, I was heartbroken when Heros was cancelled and have been searching for my superhero fix ever since.  Actually, I enjoyed watching every episode of Heros on Netflix and even though I knew the ride was over, it still stung watching the series finale on Netflix just as much as when it originally aired.

Alphas on the other hand is a fairly young show airing on SYFY and looks to be promising.  Oddly enough, the SYFY branding just didn't take and I never watched the series during its inaugural season.  So SYFY, I'm putting you on notice, step your game up before any more of your great programs risk low ratings.


Season One introduces us to several key characters that comprise a team of Alphas - humans with abilities.  The group is headed up by Dr. Rosen, a scientist played by David Strathairn, and features Malik Yoba as Bill, Laura Mennell as Nina, Warren Christie as Hicks, Azita Ghanizada as Rachel and my favorite Ryan Chartwright as Gary, a high functioning autistic man with the ability to see radio and wi-fi frequencies.  As a team each character brings a unique skill set to the table that allows them to engage other Alphas and either help them manage the lives appropriately or send violent offenders to a prison facility.  From Bills super fight or flight strength to Nina's ability to "push" thoughts and control people, this group performs like a superhuman Swiss Army Knife.

The show feels a lot like X-men, but is grounded in as much reality as possible for a science-fiction series.  A fact played up every time the team travels by minivan.  If you miss Heros and love all things mutant or alien, Alphas is the way to go and the great news is, it is currently in season two on SYFY!  Be sure to set your DVRs for this show.  You won't be disappointed.