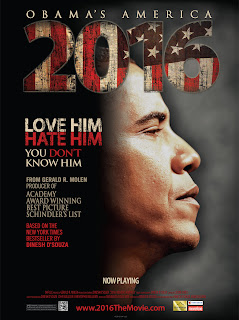 I remember the exact spot I was standing on November 8, 2008 at exactly 11 pm when then Senator Barack Obama became the first African-American President-elect of the United States of America. Four years later after unforeseen trials, the country today may not be what we envisioned then, in 2008, but I can’t fault nor credit one man. However, director Dinesh D'Souza asks viewers to envision the country in 2016 after President Obama's potential second term.

I've been watching documentaries for the past few years learning new perspectives on an array of topics impacting our culture today. And from watching those documentaries I learned to always take them with a (sometimes big) grain of salt and independent research on the claims cited goes a long way to knowing I arrived at my opinion instead of it having given to me. With that, I walked into 2016: Obabma's America with the side-eye expecting a smearing of Obama but D'Souza blindsided me by approaching from an angle that I had left uncovered.


You hear that? That's the sound of thin ice cracking under my feet.

What D'Souza tried to address in 2016: Obama's America was what shaped President Obama's political philosophy, for lack of a better word, and to answer that question D'Souza looked to Obama's past, specifically his relationship with his father and other male figures mentioned in Obama's book, Dreams From My Father. Obama's multicultural origin from a Kenyan father and Kansas mother living in Hawaii and in Indonesia with Stepfather Lolo Soetoro was cited as an untraditional foundation of ideals unlike America's past presidents which was cause for it to be examined. By expanding on that point, D'Souza asks the viewer to question; does Obama's vision for America match Americans' vision for America? D'Souza doesn’t think so and hopes to explain why.

That's a 1,000 ft view of the documentary that if you want to know more, then it's probably already on your list of movies to watch. To me, the documentary wasn't "anti-Obama" as in a flagrant attack but rather it attempted to plant a seed of doubt of Obama's political image.

I spoke to a friend within hours of the viewing and we had an interesting conversation on the "spirit" of the documentary. No other president in our lifetime has seen the opposition and scrutiny (understatement) that Barack Obama has seen in his term in the Oval office. I agreed with her up until that point. While the answer "why?" is the proverbial "elephant in the room" I cannot ignore the "why not" about any political figure, especially one in our nation's highest office. I believe D'Souza made the assumption that the previous 43 presidents had the same vision for America and that a president not from a similar background would somehow want something different. The Federal Reserve Act which established the Central Bank of the United States was a hot button issue

Many people will dismiss the documentary for whatever reason but one will surely be because it's more scrutiny on the first black President that he's only receiving because he's black. But on the other hand I think 2016: Obama's America posed a fair question that any and all candidates should be subjected to. A lot is asked of Obama, from his birth certificate to his personal relationships that are seen as strictly political. My most important takeaway from the film is that I'll start expecting more from politicians. How have your affiliations, friends, and religion shaped how you see the world and how would you bring that world to be as President of the United States? Unfortunately it's our first black president that's being asked that in such pretentious fashion.

That was where we agreed to disagree change the subject and I left to see the doctor to make sure I didn't have hypertension from the salt I had to take.