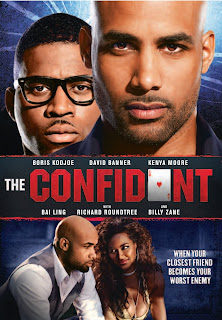 If you are looking for predictable yet sinister plot and an antagonist that actually is quite convincing even though it's obvious where the character development is headed, The Confidant 2012 is for you.  If you are expecting top-notch acting and characters you can relate to, keep looking!  Although The Confidant falls short in a few key areas the movie still has enough of a plot to keep you interested in watching it through it' entirety.


The story is pretty straight forward.  Boris Kodjoe plays Nigel an ex pro ball player who is not only addicted to gambling, he's pretty hooked on losing at it too.  His gambling actually gets him into some serious trouble in his early years an his best friend Daniel, played by David Banner, takes the wrap so Daniel can pursue his plan to become a professional athlete.  Boom, there you have it!  That is the entire foundation for the plot!  As you can imagine promises are made, truths revealed, Daniel as a blazin hot wife played by Kenya Moore [don't judge me, she was hot in the early 2000s, but is definitely holding up well based on this movie] and the recipe is set for a "settle-the-score" kind of movie.

Previously, I was critical of the acting, but I have to give David Banner his props for actually puttin some stank on his role.  Although his character's actions are predictable based on the plot development, he seemed to channel the angry goon quite well and actually reaches a point in his development where you start to feel bad for him an somewhat take his side.

If you are a Boris fan, its worth a Second Look on Netflix.  If you still can't shake Boris' whackness in Starship Troopers 3 this is not your flick and you should keep searching for something more interesting to watch on a slow night.