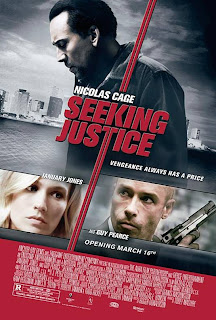 I'll be the first to admit, I'm not a big fan of the old man Nicholas Cage, but in this Netflix Second Look I must give respect where it is due.  Seeking Justice features a plot that, though predictable, will keep your attention as the protagonist falls deeper and deeper into a bad dream. In fact, this movie released in 2011 will have you examining key elements shortly after the opening scene.


Nick Cage plays the role of a New Orleans school teacher Will, who is desperate to clear his name after making a deal with a man named Simon, played by Guy Pearce.  Simon offers Will a justice for the crime committed against his wife Laura, played by January Jones, but things quickly spiral out of control when Simon comes to collect on his initial services.  Will has decisions to make and quickly realizes that he can trust no one.

Although I think Nicholas Cage is past his prime as an action star, he managed to dust off the cobwebs and show that he still has a little something left in the tank.  Overall, this movie is worth a Second Look on Netflix if you enjoy a few twists, turns and never knowing who the enemy is.  And if you ever here the phrase, "the hungry rabbit..."  Don't answer, just run like hell!!!