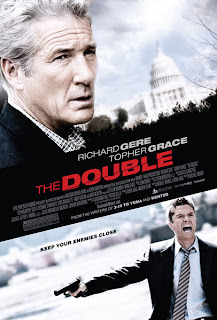 If you are in the mood for a great psychological cop-style thriller with a “who done it” undertone,The Double (2011), starring Topher Grace and Richard Gere, is an excellent choice for a Second Look on Netflix.

Released in 2011, The Double has a very familiar feel to it as aging CIA agent Paul Shepherdson, played by Richard Gere, is assigned to a case that he has a very intertwined history with. It seems that an old assassian named Cassius is picking off new targets on U.S. soil and as a senior agent, Shepherdson has to find Cassius – and find him quickly. Fortunately for Shepheardson young FBI agent Ben Geary, played by Topher Grace, is an expert on all things Cassius and thanks to his thesis as a graduate student, is hot on the trail of the old Soviet assassin.


The pacing is steady, but there is a significant reveal that comes rather early in the story. Even with this premature plot element, the movie still holds your interest as true motives are revealed. Eventually, there was an attempt at a surprise ending, but as the characters push forward, it was kind of obvious.

My final impression is that the movie had a Salt feel to it, but ultimately a dynamic cast makes this movie worthy of a Second Look on Netflix.