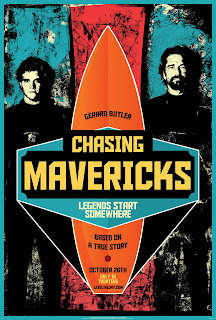 Would you risk your life for your passion? Who could stand in your way to stop you? And who would be the selfish one?

Chasing Mavericks is based on the true story of surfer Jay Moriarity played by Jonny Weston. In the biography, Jay's passion for the ocean turns into a love for surfing at just 8 years old. After 7 years and mastering the local breaks, Jay sets his eyes on dropping down Mavericks, a mythical wave only known by few surfers who have kept its location a secret. One of those surfers, Frosty (Gerald Butler), takes Jay under his wing after realizing Jay is going to surf the wave, live or die. During Jay's preparation, a friendship develops as Frosty prepares Jay physically, mentally, emotionally, and spiritually (the 4 pillars) to surf Mavericks.

Jay and Frosty were a unique tandem. Jay had no home after his father abandoned them leaving Jay to parent his mother, Kristy (Elisabeth Shue), because she was an alcoholic. Jay's only retention of his father was a letter that he wrote to Jay, not memories or flashbacks. The letter went unopened for nearly 8 years while Jay masked the pain of feeling abandoned.
Frosty was a husband and father who abandoned his family emotionally with surfing as his means of escape. Frosty's own parents died when he was young which left him emotionally insensitive to his wife and children. However, the negative aspects of their lives combined to form a tightly knit bond with them learning from each other, healing each other.

The unique aspect of Chasing Mavericks was that there was not an external antagonist for Jay to defeat, only an internal one; himself. Some passions involve external conquest of defeating an opponent while others require you to know and conquer yourself. Despite betrayal from his best friend, Blond (Devin Crittenden), and denial from his love interest, Kim (Leven Rambin), the only thing that stood in between Jay and Mavericks was Jay him. In the 4 year popularity contest known as High School, Jay was a liability to his friends' reputation while not caring about his own. His friends kept a distance as Jay was the class leper with the "rent-a-dad". Even so, Jay never compromised his goal for his friends' sake or for the sake of his own reputation. He was almost too perfect of a person for the task. Jay was a sponge that soaked up everything Frosty was teaching him which could have been partly due to Frosty's condition "no arguments, no questions". But Jay didn't even as much as falter mentally, he only asked questions to learn and strengthened his resolve. 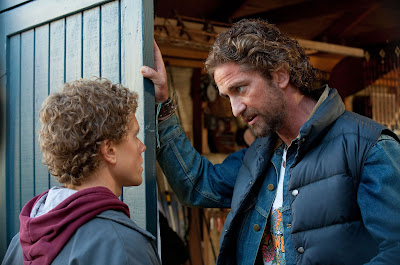 Surfing Mavericks was dangerous but the possibility of death was not missed by Jay or Frosty, it was no secret that their lives were at stake. A sketch that Jay drew of him and his surfboard entangled in the grip of an octopus was a constant reminder of the risk he was taking. However, the drawing was only in front of him when he was out of the water and not while he was in "surf-mode". When Jay was in the water he was only focused on his goal, turning fear into focus. Only Jay's mother could have made stopped Frosty from training Jay but Jay had his "permission letter" forged to ensure his he rode his wave. And Frosty's wife, Brenda (Abigail Spencer), was his reality check that surfing Mavericks put his family at risk of mourning him but he's already broken one promise to not surf.

The journey in Chasing Mavericks was more enjoyable than the destination for me. Jay's resolve to surf Mavericks superseded all and he did not lose focus. The process of watching him prepare to attempt his drop while navigating tumultuous teenager emotions made for an incredible story on screen. Chasing Mavericks was everything I hoped it would be and more.