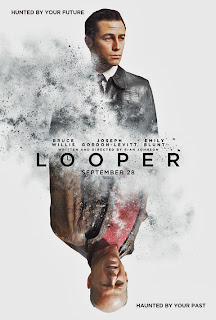 Joseph Gordon-Levitt is at it again. Looper is his 3rd major motion picture in as many months and I'm stuck wondering where the heck did this guy come from? "3rd Rock from the Sun". Huh? 3rd Rock from the Sun is where my date said he came from and from looking up his film and television filmography, wow! He's been in everything, literally everything, including a lot of movies and tv shows I've seen but I just didn't recognize the guy. So anyways, that's where Joseph Gordon-Levitt came from: EVERYWHERE.

Looper is a Sci-Fi movie about Joseph Simmons (Joseph Gordon-Levitt), one of many contract killers hired by mob bosses 30 years in the future to murder targets sent back in time. Now, a new boss 30 years in the future, only known as the Rainmaker, is 'closing the loop' on all of the loopers - he's sending them back in time to be killed by their younger selves. When the Rainmaker tries to close Old Joe's (Bruce Willis) loop his wife is murdered as he's sent 30 years into the past. After avoiding being assassinated by his younger self, Old Joe has to convince Joe to help him find and kill the Rainmaker before he rises to power.

Looper is a fantastic movie just based on its elements alone: time travel, paradox loops, free will vs predetermination, and alternate timelines.

And whenever you need a sci-fi action hero Bruce Willis is your man. Even though I can't name one he's starred in since 12 Monkeys and 5th Element do I really need to? Usually when two different actors have to play different versions of the same character they cast actors with similar features but not Looper. So how does the Gordon-Levitt/Willis match up work when they don't favor each other in the least? The answer is good old fashioned costume design as Joseph Gordon-Levitt spent extra hours in the make up chair to get his Bruce Willis schnozzle on. It distracted me a bit but it did sell the "these two guys are the same guy" thing they were going for.

Speaking of "these two guys are the same guy", Joe and Old Joe didn't relate well to each other at all. Joe interacted with his older self as if he was a different person all together with his own separate fate. Even though Old Joe was the product of every decision Joe was destined to make he resisted that his destiny as Old Joe was already set in stone. Joe still wanted and felt that he had a choice in the matter, the heart vs mind conflict. Old Joe knew what needed to change but Joe's heart had trouble accepting that Old Joe's fate would be his as well. Complicating matters even more for the Joes, they each found love in different women and Joe was determined to save Sara (Emily Blunt), not Old Joe's wife (Qing Xu), from being caught in the crossfire. But the more things changed, the more they stayed the same. Both Sara and Old Joe's wife were the reason they left the Looper lifestyle, saving them from their addiction and ultimately themselves. 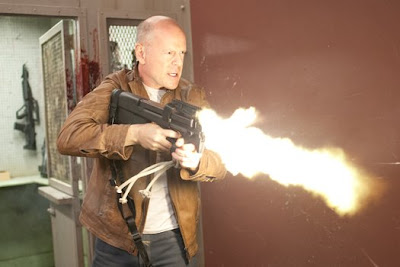 Time travel itself wasn't the focus of the movie so virtually no screen time was spent on explaining any aspect of it; it just happened. However, time travel was the means used by Looper to pit free will and predetermination right against each other. Come to think of it, Looper is the only movie I can remember where both were exercised by the main character. With as much as Looper used tried & true sci-fi aspects it added it's own contribution to the time travel genre by offering what role memories play in a time traveler's connection to their other self which humanized Joe even more. And the best unintentional, passive, default aspect about Looper is that it makes you apart of the time travel experience as the Observer, a component of Einstein's Theory of Relativity.

My nerd is showing, excuse me.

Looper also had some dark elements as well. Aside from the typical futuristic hell-in-a-hand-basket society, Looper showed just how far someone would go in the name of self preservation and it was pretty damn far. The movie also highlighted how dysfunctional guys like Joe have dysfunctional relationships. Not that I've had a stripper girlfriend but I, ahem, heard it would go a little bit like Joe and Suzie but you know what they say, "she don't wanna be saved". And apparently in 2044 good old fashioned syringes have gone by the wayside for eye droppers as a means of illicit drug delivery but the Womp Womp Award goes to the futuristic motorcycles because it was quite literally a crotch rocket. It was a nice touch to show how even the small things will be different in the future, an aspect I liked about Dredd3D as well. Also like Dredd3D, Looper had mutants called "TK's", people with the ability of telekinesis. Looper's future is interesting, albeit odd. 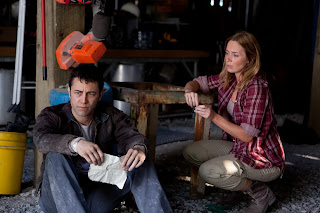 Sci-Fi movies are just fun to think about, especially when they deal with real scientific theories. Even more fun is that if you rationalize the movie different than I did then, well, you're right - we're both right. Your interpretation isn't anymore wrong than someone elses is right. So when I say that the Rainmaker really wasn't "closing loops" by sending Loopers back in time to be killed by their younger self because...


It's hard to talk about all of this without spoiling the movie so just go watch it and then hit up SteveandJtv or That's Atlanta on facebook and we'll talk about it some more.