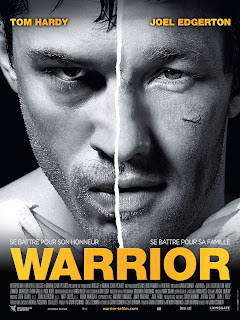 There is nothing better than a little sibling rivalry and skull-crushing punches if you are in need of an adrenaline-filled movie night.  It's even more entertaining if you couldn't get enough of Tom Hardy as Bain in 2012's Dark Knight Rises.  Warrior (2011) does just that and more as two brothers from a broken home pursue their passion for punching and kicking people.

Starring Hardy (Tommy Conlon) , Nick Nolte (Paddy Conlon) and Joel Edgerton (Brendan Conlon), Warrior immerses you into the lives of two brothers who unknowingly take a renewed interest in Mixed Martial Arts [MMA] just before a major U.S. tournament.  Though both men are motivated for different reasons, it becomes obvious that their fractured family is the power source that drives them - for better or worse.


Moviegoers will enjoy the balance between the Cain and Able undertone and the brutal cage fighting.  Both brothers' personalities are reflected in their fighting styles with Brendan maintaining a very heady and relentless style while Tommy focuses his rage, with laser point accuracy, on anything in his path.  Ultimately the two men meet in the ring for what proves to be one of the best brother versus brothers you'll ever see.

This Second Look on Netflix is well worth your monthly subscription fee.  I was blown away by the power of MMA competition while my girlfriend was torn to tears as two brothers carried the weight of the world on their shoulders and were forced to duke it out in the end.