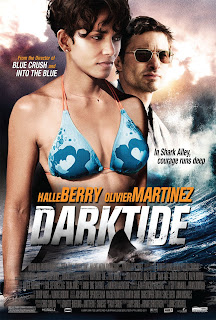 As a Halle Berry fan, it's safe to say she can do no wrong in my mind. Actually, there was B.A.P.S, but even then, I can tolerate that movie if I turn the volume down and only focus on her scenes. So that said, I couldn't resist the urge to watch her parade around in a bikini for 90 minutes in the 2012 flick, Dark Tide. The only problem with my plan to enjoy Ms. Berry's body of work is that five minutes into the movie, I quickly identified that the film's poster art was a bit misleading

Halle's character, Kate Mathieson, is the world's best shark whisper and along with her husband, Jeff (Olivier Martinez), are regulars in the waters off the coast of Capetown, South Africa - the same exact waters that are feeding and breeding grounds for the worlds most ferocious great white sharks. The husband and wife duo risk life and limb on a regular basis as they free swim with these killing machines for the sake of filming a documentary. Unfortunately, it isn't all fun and games when tragedy strikes and forces Kate to rethink her life's work.

Kate doesn't fully unravel in the wake of her traumatic experience, but her marriage suffers and her business as a tour guide is in jeopardy until Jeff returns with an offer and payout she can't refuse. All she has to do is take to the seas for one more swim with a wealthy thrill-seeking adventurer and his son. It seems like a great way to save her boat and business, but her rich guests have other plans once the sharks begin to circle.

Although this movie received low ratings, it held my attention even after I realized I wouldn't enjoy the Halle booty shot I had hoped for. In fact, Dark Tide is more about overcoming the guilt of past mistakes than it is about swimming with sharks. Factor in the loaded gun that is swimming with great white sharks and this movie manages to evoke several feelings as you are left wondering what will happen next.

The movie does drag a bit in the middle 45 minutes, but if you can't get enough of Ms. Berry and don't have Swordfish expectations, you may want to give Dark Tide a Second Look on Netflix. Visually, the cinematography is breathtaking and also makes the movie worth a peek, but if you are a “Yeah Right” person, you may not be sold on deflecting a great white attack by pushing it's nose away and this may not be the movie for you.