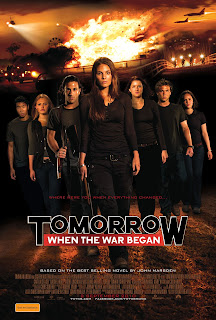 Sometimes Netflix surprises me with a gem that reassures me my monthly service fee isn't going to waste.  In this case, it came in the form of a great action flick from Australia.  Tomorrow, When the War Began isn't a new concept.  In fact, with the upcoming remake of Red Dawn, this movie is a bit of a throwback to the 1984 classic and should get you in the mood for some "kids save the world action."

The movie opens with Australian teen Ellie, played by Caitlin Stasey, masterminding a weekend camping retreat with a small group of classmates.  Fans of the Breakfast Club will appreciate the diversity in the group of seven classmates ranging from the town screw-up played by Deniz Akdenix to the deeply religious church girl played by Ashleigh Cummings - who has an excellent come to Jesus moment during the movie's largest action scene.

With a weekend of camping planned, the group of high schoolers head into the woods for a few days of bonding and thrill seeking.  One the night dozens of aircraft are seen overhead, and thought it's out of place, Ellie doesn't seem phased by it until she and her friends return to her family's country-side home to find the place abandoned.  In search of answers, the teens visit several of their homes with the same outcome and eventually sneak a peek into town to discover that their once pleasant community is now a prison camp guarded by armed sentries, tanks and air support.


As the teens attempt to establish priorities to aid in their survival they are faced with new challenges like military security sweeps, injuries and even cowardice among the group.  Ellie seems to channel her inner Sarah Connor and through her actions informally becomes the leader of the group as they seek to do anything they can to help take their town and country back.

If you are an 80s kid and get chills anytime you hear "Wolverines" yelled out, you will appreciate this movie.  Oddly enough, I found myself locked into this flick even though it had Red Dawn written all over it.  The action scenes were convincing and made sense.  You'll never see the group of teens mow down waves of highly trained and skilled infantry, but you will see survival tactics and a little war strategy.  In fact, they miss several opportunities to scavenge assault rifles and other supplies from downed enemy soldiers, which actually grounds the movie a bit as the kids develop their tactics and thought process over time.

This Second Look on Netflix will make a great date night movie so que it up and get ready for a good movie that pays its respect to the 80s.