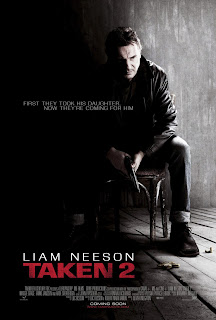 Taken was one of those movies I unanimously heard good things about but never got around to watching it so with the sequel hitting theaters this weekend I bummed the original on dvd before planning to catch Taken 2 opening weekend. But after finally seeing the first Taken I just couldn't do part 2 because Taken was too much of a good thing which is a bad thing. It was packed so full of action that it left no room for a story. Even though I'm biologically predisposed as a guy to like action flicks, Taken had so much butt kicking and bone breaking there was no room for dialogue that didn't have to do with the butt kicking and bone breaking. My first clue should have been the title of the movie: Taken 2. I mean, come on, how about a little more effort?

Since I didn't watch Taken 2 for a review cause I'm waiting to catch it on cable, here's my short list of alternate titles:

Any one of those would have worked for me, any. And how realistic is the premise of the movie? Your ex-wife who married up after dumping you and taking full custody of your daughter is kidnapped so you turn Paris upside down to save her.

Here's how the movie would play out in real life:

That script would be the shortest blockbuster, ever. #1 among the divorced 30 - 55 year old male demographic at a cool $25 million box office debut - coincidently the back alimony owed by the target audience. And instead of a Second Look, J is gonna write a First Look after Taken 2 hits Netflix.

Anyways, we do have some pretty good pickings coming up at the box office in October. Here Comes the Boom, 7 Psychopaths, Sinister, Argo, and Chasing Mavericks to name a few. V/H/S looks like a new take on the POV horror genre so I may peep it out - at least they'll call the sequel "D/V/D".

I'm not knocking you if you liked Taken but ladies I'd rather catch Taken 2 with you via Redbox in Cuffing Season 2013.