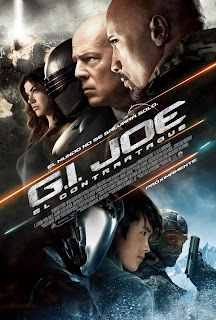 Let me preface this entire post by stating - on the record - that I was a fan of G.I. Joe Rise of Cobra.  Even with all it's flaws and over the top antics, I enjoyed Cobra's technology versus the Joe's bullets and bayonets.  That said, I absolutely hated G.I. Joe Retaliation and the more I think about it, the more I wish I would have just waited it out until it reached the Red Box.

Before I get ahead of myself, I want to take a moment to offer a brief history about G.I. Joe Retaliation.  Initially, it was slated to hit theaters during the summer of 2012 - around the same time as Dark Knight Rises.  Unfortunately, Paramount pulled the plug and pushed the release date back to an [at the time] unspecified date.  The original buzz was that execs. wanted to capitalize on 3D technology and needed time for the conversion process [which by the way, is kinda cool if you've ever seen it done] and I initially subscribed to the rumor until I laid my eyes on the first official trailer that came out after the original cancellation date.  It hinted that the Joes would be blown to smithereens leaving only Snake Eyes to hold down the fort as an original character from Rise of Cobra.

All that said, it hit me sometime around Christmas that the movie wasn't pulled because of some need to capitalize on a 3D conversion.  The writers screwed up and needed to save themselves from embarrassment.  Now, I'm not a Hollywood insider, but the buzz around the internet was that they used the additional time to give Channing Tatum's Duke more presence in the movie and to share his relationship with Roadblock.  If there is any validity to this rumor, that pisses me off even more as a G.I. Joe fan.

Fast forward to Easter Weekend 2013 and I couldn't wait to get into a theater to feast my eyes on this long-awaited film.  After all, I was hooked the moment I realized that Rise of Cobra left several story elements open for a sequel.  My excitement was vaporized the moment Duke got blown to Kibble.  [Sorry for the spoiler, but if you didn't know he was dying you live under a rock.]  Killing off Duke is nothing new in the G.I. Joe universe, but considering that G.I. Joe Retaliation was a bit of a reboot; this makes me scratch my sexy bald head.

With Duke dead, we don't get to explore his relationship with Flint and Lady Jaye, nor do we enjoy his leadership and "we can always win" mentality.  In fact, Duke's Death exposes a few flaws in this new G.I. Joe Universe that simply can't be ignored.

For starters, Duke dies when a hummer next to him explodes.  Now, I'm not saying Duke should be invincible, but if you consider Storm Shadow's ordeal in one of the earlier action pieces, that hummer should have only given Duke a few 2nd Degree burns and maybe a loose stool for a few days.  Also, if  you consider Cobra Commander and Destro pop up in this movie and the crazy crap their bodies have been through in the first movie, Duke should have only had a flesh wound when the Hummer exploded.  Finally, When you look back on Storm Shadow's ass thumpin he took from Snake Eyes in Rise of Cobra, the 500ft plunge through those electrical charges, and the cold arctic waters he eventually sank in, Duke should be somewhere rubbing some Tussin on his paper cuts and laughing about how his Hummer blew up!

Next on my list of gripes is Lady Jaye.  Lets see - Yes, Adrianne Palicki brought the sexy in a few scenes but it wasn't enough to convince me that she was Lady Jay.  Last I checked Lady Jay was a skilled markswoman, super athletic and had this love triangle thing with Duke and Flint even though she was always in some form of a relationship with the later.  She did handle her business but it just didn't feel right.  Needless to say, Retaliation's Lady Jaye is not the red head, curvy, athletic, trash talkin, staff wielding Lady Jaye I fell in love with in the 80s.  Though I'll admit, she's definitely fun to look at in this version of G.I. Joe.

At this point in the review, the direction I'm going in should be obvious, but I promise I'll be good and offer a few positives about the movie, but first I must purge a little more negative energy from my system. 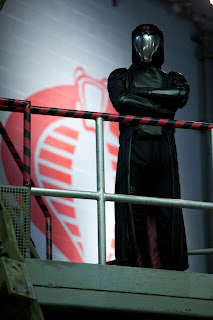 My boy Snake Eyes played a major role in Retaliation, and even though he is mute, this version of Snake didn't feel right either.  Snake Eyes is a Ninja and in Retaliation, he felt more like a close quarters combat specialist.  It would have been nice to see Snake Eyes taking out rooms of Cobra operatives like the Dark Knight as opposed to using a machine pistol to blast throwing stars out of the air.  I'll admit the cliffside fight was mildly entertaining however there was a moment where everyone in the theater simply said, "yeah right."  If you dare watch G.I. Joe Retaliation after being warned in this review, you'll know the moment when you see it.  Hint: Ringling Brothers is a definite career move for Snake and Jynx upon retiring from the Joes.

The Rock, a.k.a. Dwayne Johnson, actually didn't disappoint.  I guess that's easy to say because he's essentially the same character in every movie.  With the exception of a few kiddie movies he's starred in, he always seems to be the same exact guy.  He wears extra schmedium shirts, uses his muscles, punches people, throws people, shoots people and offers a good one-liner every blue moon to show off his softer side.  Essentially, you can't go wrong with The Rock unless you are casting for a soap opera. Roadblock has always been portrayed as the muscle and weapons specialist, but Retaliation made him the leader of the bunch, which was bit of a change for this character.

Overall, it's easy to see that this re-boot/sequel [I'll call it a re-quel] attempts to ground the G.I. Joe universe in reality and this is where my appreciation for Retaliation kicks in.

Yes ladies, gentlemen, fans, geeks, and 80s cartoon fanatics - bullets do kill!  In the opening action sequence it is quickly established that the G.I. Joes aren't shooting blanks and are quite handy with their assault rifles and I must say I was satisfied with this new grittier tone.  No, we didn't see blood splatter or even the entry/exit wounds, but there were plenty of camera angles that didn't cut, allowing you to clearly see a Joe fire off into a body and watch it drop.  Now, as excited as I was to see Cobra bodies pile up, I am sad to report that Snake Eyes is still going the route of Leonardo the Ninja Turtle with his blades.  No blood on his katana and all his final attacks with the blades are either blocked from view or off camera and implied.  Oh well - I guess I will have to wait for the new Wolverine/X-men movie to see blood on blades [as rumored].

Cobra Commander - with his limited screen time - was actually well done.  He was a true throwback to his animation and comic likenesses.  His black leather was perfect and his mirror tint mask was a thing of beauty for any fan boy!  Unfortunately, he didn't scare me.  In fact, he seemed more like a supporting character than the lead villain.  And come to think of it, there never really seemed to be one identifiable lead villain.  Honestly, it felt like the corrupted U.S. Government played the role of antagonist as opposed to C.C.  so he just didn't feel important and once the final action sequence started, C.C. had no major role in the fighting.  He simply dipped out and wasn't seen again.

If you are a fan of the animated G.I. Joe Renegades cartoon on HUB you will quickly see the direction  that Retaliation is going in as the small team recruits a few teammates to help them unearth a dark truth.  In this case they aren't fugitives [yet], but it is obvious they are pulling from the success of the Renegades cartoon series.

G.I. Joe retaliation isn't a complete flop, but this only applies if you didn't watch G.I. Joe Rise of Cobra.    In fact, if you haven't seen Rise of Cobra, feel free to check out Retaliation, but go for the matinee or wait it out and catch it at a $1 theater.  Both films should be perceived as separate stand-alone pictures to truly be appreciated.  Unfortunately, it gets confusing thanks to the plot elements that were carried over from the first film. 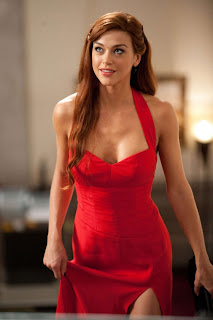