What Every Man Should Know About: Tyler Perry's Temptation 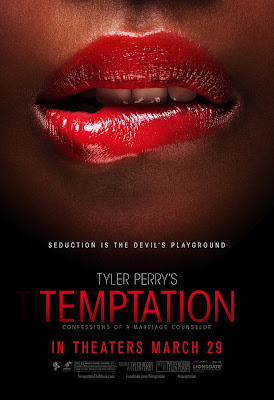 While sulking in my disappointment over GI Joe:Retaliation at a bar I got a text from my homegirl about joining a group for a midnite Temptation showing and since I was at the bottom of my glass the only direction was up, right?

Without stating the obvious about this chick-flick, there were a few good take-aways for us fellas in Tyler Perry's Temptation: Confession of a Marriage Counselor so I made a few #Note2self's that I'll hopefully keep in mind during my future matrimony:

#Note2self 1) Talk Listen to your woman. I got the impression that Brice (Lance Gross) stopped talking listening to Judith (Jurnee Smollett-Bell) a long time ago. He was in his own Brice world where everything was honky dory because there wasn't any conflict in the marriage. "..... Men marry women hoping they'll stay the same" - unknown. Do. Not. Let. This. Be. You!

#Note2self 2) Protect your woman. I wonder what about me makes a woman feel safe when she's with me. Not that I won't protect her but how does she know beyond a shadow of a doubt that I will, not having done so before? When Judith needed protection Brice fell back and she had to stand up for herself and the fallout from the situation was that Judith had a "feeling" she "didn't like". I knew that feeling was her not feeling protected only because women have expressed the opposite sentiment toward me in just as vague (and direct) terms.

#Note2self 3) Encourage and back your woman. Judith wanted to start her own private marriage counseling practice that Brice put a 10-15 year plan on. TEN TO FIFTEEN YEARS! Who does that in 2013!? You could see the life drain from Judith's face when he hit her with it too. I'd like to think if my woman wanted to go for her dream then I'd be all-in from that moment helping her make it happen ASAP, no matter the timing.

#Note2self 4) Don't forget important dates: Birthdays, Anniversaries, her AKAversary, etc. Being a sock model with a guitar and singing Otis Redding isn't enough to amend for TWO YEARS! of forgotten birthdays (this guy NEEDED Facebook's Calendar App). She's not cutting you slack, she's giving you enough rope to hang yourself.

#Note2self 5) If your woman comes through the front door, stripping off clothes, and sandwiches herself between you and a wall then you better knock them "walls" down, ya dig? I'll be damned if I wanted to "take it to the bedroom" and "do it the 'right' way". Don't even take'em off, just pull'em over! An old adage is if she wants something new then she got it, the idea at least, from somewhere else. Handle that.

And if you haven't guessed it, Judith's jumpoff, Harley (Robbie Jones), stepped in on all 5 notes! It was like taking candy from a baby. But do know that before Judith stepped out on Brice that she turned to him first however Brice left the gate wide open for a wolf like Harley to just waltz right in.

Now Brice being a dud does not give Judith a pass for stepping out on him but I am going to blame the victim because there wouldn't have been a movie if Brice had read Judith's non-verbal communications. She needed reassurance after he didn't protect her and she also needed spontaneity and passion by wanting to have sex in crazy places. (Not to mention forgetting her birthday two years in a row. TWO YEARS!)

The signs were all there that Brice needed to switch his game up but he didn't and I pray that I'm not that blind to my wife's changing needs. Brice begged for Judith back but back to what? The same-ole same-ole? He never acknowledged that her needs changed, there was never an "ah-HA!" moment that put everything together for him. Ok, he admitted that he took her for granted - a gross understatement (TWO YEARS!) but he never said how he took her for granted so what change would he make? But I reiterate, Judith's cheating wasn't Brice's fault, however, I would have reflected on what I could have done differently in THAT scenario.

Now the real comedy was that Brice got remarried. #GTFOH! Mark my words: there will be a sequel - Tyler Perry's Temptation 2: Confessions of a Bored Wife.

Email ThisBlogThis!Share to TwitterShare to FacebookShare to Pinterest
Labels: Entertainment, Movie Reviews, Off the Record