What Every Woman Should Know About: Oz the Great and Powerful 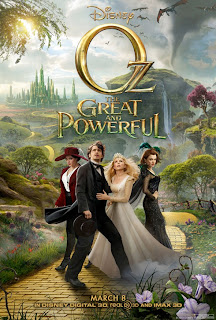 Mostly everyone is familiar with the story of The Wizard of Oz, right? Ok, now tell me how it all started: Who is Oz and how did the Witch from the West become so wicked? Don't know? I'll tell you. Oz was a playa from Kansas that turned out Theodora, a good witch, into the wicked one from the west side. Right there on the big, silver screen I saw the viscious cycle of good girl plus bad boy equals witch. Now I'm not woman bashing and I know a man telling women "what they should know" is thin-ice territory but just hear me out on this one because this is actually more about me men than women.

Sideshow magician Oscar "Oz" Diggs blew out of Kansas and into the Land of Oz while bouncing from one woman to another. Ever the opportunist, Oz does the same old song and dance when he meets Theodora, a good witch who didn't fly on a broom. And Theodora, believing that Oz is the prophesied Wizard to free the Land of Oz and the Emerald City from the "wicked witch", declares herself Oz's queen because of who she thinks he is - an actual wizard. But as Oz meets the other witch sisters of Oz, Evanora and Glinda, Theodora's jealousy drives her to take relationship advice from her single (#ShotsFired) sister, Evanora, resulting in a broken heart and turning her into the Wicked Witch of the West.


How many times has this played out in real life? Theodora, like many women, believed Oz to be something he wasn't, a wizard - or a decent guy. And her naivety cost her her genuine good nature and the withering away of her heart. The tears she cried over Oz literally burned and scarred her face! Theodora even rode on a broom as The Wicked Witch of the West to spite Oz because he thought all witches did so. Talk about creating a monster. Now, I'm not woman-bashing because the focus is on Oz so let's take a closer look at him.

Oz knew exactly what he was - a fraud. Hell, he told anyone who'd listen that he wasn't a wizard and Glinda the Good Witch listened, unlike Theodora. And even though Glinda knew by Oz's own words that he was not a real wizard she also knew that there could be a reason he had come into her life. So Glinda let go of every preconceived notion of what she thought a wizard should be and simply trusted Oz to be the wizard she needed him to be, even acknowledging the possibility that Oz might not even be that, after all. See the difference?

Now Oz would be content to just bounce from woman to woman in Oz because these broads had powers and shit. But the conflict of A) the oppressed people of Oz and the Emerald City thinking you're their wizard and B) their oppressor wants you dead because you just might be the wizard to save them pushed Oz out of his self-centeredness and into a critically thinking and caring man. Believe it or not, the only difference between Oz the sideshow magician and Oz the Wizard was who he was using his talents for - himself or others. And when Oz helped others he was able to come up with a plan to outsmart the evil broads that had actual powers and shit to free the people of Oz and the Emerald City

Epilogue:
"You don't see the world as it is but as you are." - Johann Wolfgang Von Goethe

It's just a movie but I saw a lot of myself in Oz and my past relationships play out in the movie - sad, I know. Even more discouraging was Theodora, now the Wicked Witch of the West, shooting down Oz the Wizard's peace offering cackling "NEVERRRRRRRR!"