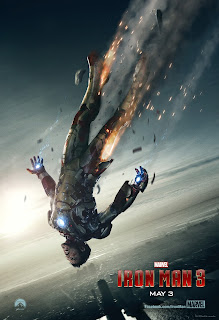 Okay, so if you are true fans of all things Steve and J TV, you already know this was one of the major movies on our must-see list this summer.  In fact, my brain doesn't even begin to acknowledge summer blockbusters until there is at least one major superhero movie added to the list of summer releases.  Yes, Fast and Furious 6 has me jumping with anticipation, but nothing about The Rock or Michelle Rodriguez gets me fired up like a good DC Comics or Marvel Film.  That said, I can't believe the shame I saw this weekend.  And somebody had the nerve to call it Iron Man 3.  Steve said it best in his spoof review, "The movie is titled 'Iron Man 3' not The Chronicles of Tony Stark..."


Fans of my previous movie reviews already know where this is going, so let me get the good out of the way early so I can save my reserve ARC reactor power for the big finish that is sure to upset movie fans that blindly show love to crap movies and get pissed when someone like me comes along to crush their dreams.

The Bad
Recapping Steve's take in his spoof review, I couldn't help but notice that there was a major emphasis on Tony Stark the hero.  My guess is, following the events in NY and the Avengers, Anthony Stark was feeling some kind of way that he is basically just a chump if he gets caught slipping without his iron onesie on.  This is evident throughout the film as he seems hell-bent on ensuring that he can quickly get in and out of his armor and control it remotely.  He even goes so far as to implant contacts on his body and incorporates hand gestures to control the armor when he's not in it or needs the parts to fly to him and affix themselves to his body.  Yes, I did think that was cool, but it definitely foreshadowed a character flaw; that Tony realizes he is vulnerable.  Oddly enough, this is also where the movie made its greatest mistake.

Just like with Iron Man 2, there is roughly a 45 minute span in the center of the movie dedicated to building up then breaking down the story line.  During that time, there is basically no suit in sight and actually, we mostly watch Tony go all Mike Lowery with a few homemade weapons against highly trained and heavily armed guards.  Oh, and don't get me started on the fact that during his raid on Johnny Tapia's mansion, he was actually going after the Manderin - minus the Iron Man armor which was in the shop for repairs.

[Insert plot twist here and the largest WTF moment ever in a comic book character movie.]

All I have to say is, how in the hell were the script writers allowed to do this to Iron Man's leading rogue.  It was a freakin shame and totally made the movie a dud in my eyes as my expectations were insinerated with a unibeam.

As I was leaving the Epicenter in Charlotte, NC, where I watched this nonsense, my subconscious began to rate all of the Iron Man movies and I reached the conclusion that Avengers was the best Iron Man movie to date.  1 was an origin story that established the universe and expectations, 2 focused on establishing Tony's superhero identity and 3...  well 3 showed us that...  well 3 didn't show us crap.  We were introduced to a little bit of new tech, a few pre-mini arc reactor flashbacks, and a metal suit orgy at the end.  Oh, and we got to see Tony Stark go all Bruce Willis with a damn paintball gun, a couple of smoke bombs and a Go Diego Go backpack.

Yes, I do plan on completing my Iron Man Blue Ray collection, but I will honestly say that it will probably be the most agonizing purchase I ever make.  The movie is riddled with loose ends that never got  tightened up and again the plot twist will make you slap the person next to you.

Here are a few of my final thoughts:
Feel free to peep this movie during the matinee hours.  If you have a hot date, you're better off shooting pool for the evening then checking out Iron Man 3 on your own time - during matinee hours.  Marvel dropped the ball on this one.  Proceed with caution.