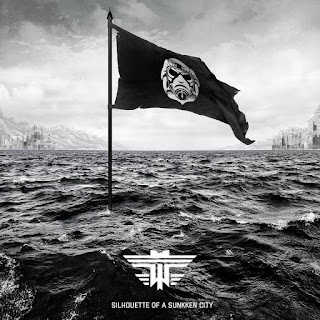 First, I'd like to apologize to J and the rest of the Steve and J family. Last Friday was the end of my unannounced oxygen fast that I began in 2014 anticipating Spark Master Tape's 'Silhouette Of A Sunkken City' mixtape. That feat would require me to limit all functions, mainly typing, in order to conserve enough oxygen in the worst case scenario that the tape was delayed. But when 2015 came and went like the no name participant of a one night stand, it looked as if that tape would not drop. Nevertheless, I knew that my Paper Platoon General would deliver me from my asphyxia induced hallucinations and that day came on Friday, April 15, 2016.

Silhouette Of A Sunkken City is a heroic dose of magic mushrooms invokking ego death. Weighing in at 22 whole grams of #SWOUP, Silhouette Of A Sunkken City is Spark Master Tape's most extensive offering to date. Even though the bullet holes in my crib kept me cool in the summers prior, for this much Swoup I knew that I would require the set and setting of filthy darkkness that I would find in a dumpster at a boarded up project. In the solitude of that sanctuary I experienced synesthesia so vivid from DJ Charlie's production that it made the fractals I see freebasing dimethyltryptamine look like meconium. So while other rapper's efforts keep potential Goons blind to their Shadow, imagining themselves as figures of light, Silhouette Of A Sunkken City made my own darkkness conscious.

As the elapsed play time counted, uncomfortable truths about myself began to surface that I overcome in labors of energy work. By repeating the opening lines of 'All About The Money' in mantra, I was able to begin resolving the cognitive dissonance between the person I thought I was and who I actually am

And 'All About The Money' is the only clue Spark would offer as to the absence of Dat Nigga NuG and KAi Sky Walker, two chefs that have contributed to previous Swoups. But a Sunkken City is a vast, desolate place excavated by its sole occupier - you. Standing alone in a place that you prepared for yourself not knowing if it is a tomb or a cocoon is intimidating, to say the least. And intimidation of this process is the reason why this birthright is forfeited by all online dry snitching Wiz Khalifa fans. Now, I understood my oxygen fast as my first labor to my own individuation. So as I descended further into my own Sunkken City I next happened upon my own personal paradox where my state of neurosis melded my past and future into a present that's anything but a gift, as told on '365'


"On the bottom of the ocean
when I'm gone, my brother I'm alive.
...
But I'd rather go to hell
then live the hell that I'm living now"


Spark's duality of being mortally eternal and existentially theoretical is a staple ingredient in all Swoup but even more pervasive throughout Silhouette Of A Sunkken City.

"I got visions of my death in 4K.
Got a DVR so I been watching the shit all day."
- Goin' Robbin'

"When I die bury me wearing my maskk.
Coffin open if my body survives the shot and the blast
This for every man still walkking who been robbed in the past."
-Medicine


"The chance now is second to none
that if the man had no gun
and they shot the man down.
We wouldn't read nothing about it
in papers unless the man ain't really been black or brown."
-We Shall Rise

As everything I thought I knew broke down even further, I began to feel as though I was dying and being born at the same time. Sensing a clarity of Self, momentarily without an ego, I rolled 'Panama Papers' and immediately begin to integrate this experience with my Silhouette as a 'WAKKEBOI' destined for 'Livin Lavish'. Then my breakthrough came.

Spark Master Tape is a maskk, a phantom, the facade of the unkknown and unackknowledged self. A collective memory in the minds of men - an archetype. So to try and ascertain his identity would be to chase your own tail when the only tail worth chasing is that Amber Ro. And to look for him outside of yourself is to deny the Goon on the inside because he is every man, thus, no man.


"And they still try and find me though.
Leave me the fukk alone."

Now, isn't that the inner most wish of us all? To be left alone, unbothered by this podunk reality of maskked egos telling us what we are and what we believe in. I now know what I am and what I believe in. I found myself in that dumpster. The dumpster of my ego rotting with a stench of a pussy that smells like it's growing mold, out stinking all of the biodegradable garbage surrounding me, eventually driving me out. And with my ego no longer weighing me down, I ascended from my Sunkken City having soul searched my own Silhouette.