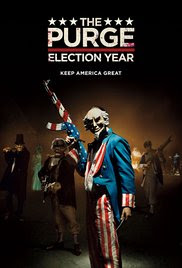 So tonight marked a few firsts for me.  For starters, it was my first time attending a moving screening.  It also was the first time I realized that the building I had driven past for 10 years in the South Park area of Charlotte was actually the Regal Cinemas at Phillips Place.  Finally, it was the first time in months that me and the beautiful girlfriend had met up immediately following work for a pseudo date night.  Oh yeah...and it was the night of the Purge - the one night of the year where laws don't matter.


The Purge Election Year takes place a few years after the events of the last purge movie and our good friend Sargent Barnes is now the lead security officer for a presidential hopeful, Senator Charlene Roan (Elizabeth Mitchell).   The movie gets to the point rather quickly by having all of the lead characters blatantly state their purpose for existing and essentially needing to survive the purge.  In particular Senator Barnes political platform centers on one agenda item; ending the purge.  Obviously her priority is met with mixed sentiments which leads to her becoming targeted for purging.

Now Bubba Gump (Mykelti Williamson) on the other hand - played by the dude that played Bubba Gump who is a deli shop owner does the unthinkable throughout the movie - Provide tons of well-timed comic relief.  He also plays a central role in a few bad ass movie moments that make you say, "If I'm killing zombies, I want Bubba Gump rollin with me."  Williamson actually stole the show even though his reason for surviving was a bit campy especially with how his purpose was revealed, but his character was a great contrast to a dark movie.  Then again, most comedy comes from a dark place. As a result his character definitely had a few skeletons shifting about his closet.  One skeleton in particular saved the day when the crew was corned and clearly out-gunned.

Aside from the Senator's survival story, the lead antagonist was perfect.  Imagine Batman without a mask, willing to kill, with cool tech and a squad of henchmen.  Now put a bunch of swastika and confederate flag tattoos on his forehead and that just about describes him.  The writers got it right by not giving him a ton of dialogue.  He's a merc - not much to see here people!  Just stay out of his sights.

The movie was action packed from start to finish and definitely had a better pace than previous Purge movies.  Clearly Michael Bay had a hand in it.  Oddly enough, I wasn't even aware Bay was a producer until I saw a "slow-motion character walk away cut".  I immediately whispered to the GF, that was so Bay!  Most of the action took place in the open streets of Washington D.C. which added more danger to the recipe and gave my boy MB more opportunities to blow shit up!

In the end, The Purge Election Day felt more like a franchise reboot.  The return of a lead character, gave the movie a Resident Evil feel, but without the "yeah right" moments.  In fact, there were several moments of applause in the theater when common sense things happened, such as quickly eliminating threats.  And when I say quickly, I do mean quickly.  Why drag a scene out.  Just bust a cap and keep it moving!

Having seen all three Purge movies, this is by far the best.  The original was the first of its kind, the second was rather boring and felt like an extended version of the first movie.  But this third installment, had a different vibe.  It was entertaining and had a firm grip on its own identity, which I can't say for the Purge Anarchy.

If you enjoy a great survival horror movie and are feeling bummed that we didn't get a summer full of super heros, go see The Purge Election Day.  It will help you release some of that pent up frustration you may be feeling.

Best Moment:  Grand Theft Auto-Style Kill
Best One Liner:  Everything Bubba Gump Said
Best Realization:  Learning that you can bring your own food into the theater during the screening.