Voltron is Mecha anime involving robots being piloted by humans - oftentimes kids/teenagers. Now, how do you get five teenagers - 4 boys and 1 girl - to live in close quarters, working together as a team without killing each other over the girl? Everyone stays in their own lane; that's how. So here are the 5+1 major archetypes usually associated with any team dynamic in a cartoon or anime:

The Geek - the brain of the team. What he lacks in brawn he more than makes up for in mental faculties to think his way out of a bad situation. He's usually the Team Mechanic and most likely to get caught slipping...and be captured.

The Brute - the muscle of the team. For what he lacks in brain he uses his brawn to fight his way out of a bad situation. He's usually the House Chef and most likely to be lured away...and be captured.

The Rebel/The Chosen One - As The Rebel, he's the loner of the team, an enigma. As The Chosen One, he has an uncanny natural ability for piloting despite not having any formal training which, initially, makes The Chosen One a liability. What differentiates The Rebel from The Chosen One is their relationship to The Mentor (see below). In either case, this archetype is the Leader's only real competition except that The Rebel doesn't want the responsibility of leading a team and The Chosen One doesn't have a leader's ambition. These qualities make him the Team Bad-ass and most likely to wander off...and be captured.

The Girl - The Alpha Female and by Alpha I mean usually the ONLY female in the series. So, not surprisingly, everyone has had a crush on her at some point but she lowkey crushes on The Rebel/The Chosen One. She's the heart of the team that everyone rallies around but, ironically, the most likely to be left alone at an inopportune time...and be captured.

The Leader - The Alpha Male who is as smart as he is physically fit. His only fault is the tunnel vision of his own ambition to be a great leader but he's quickly humbled by a team defeat. But as he grows with each victory the team grows and reaches new heights. He's the one that formulates the plan to rescue everybody that was captured.

The Mentor - the common denominator who assembled the team that's not a pilot. The Mentor can be a guardian father-like figure to the entire team that The Rebel has a unique affinity for or an authoritative military type that bumps heads with The Chosen One. In either case, The Mentor sees the potential of the team as a whole that they do not realize themselves and serves as their rock.

From the perspective of Jungian Psychology, each of these archetypes come together to form 1 whole psyche that is the Mech Bot itself - Voltron. It's about time for another picture, isn't it? 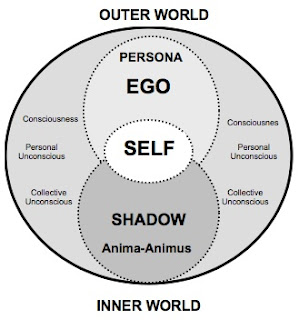 So when these archetypes experience conflict from the Outer World (bad guys) they must each grow in a process that Carl Jung coined as "individuation" for "self realization" to form Voltron and overcome the bad guys. This is an on-going journey brought about by conflict from the Outer World which can highlight an inner imbalance in the Team Dynamic where a lesson needs to be learned by a particular archetype or the team as a whole. Therefore, without any one member of the team fully representing their aspect of the Mech Bot psyche their is no Voltron. Period. We will literally fall apart right out of the sky.

Were you expecting that over-analysis? Neither was I but I promise tomorrow will be much, much lighter. So there's your psychology lesson for the day.