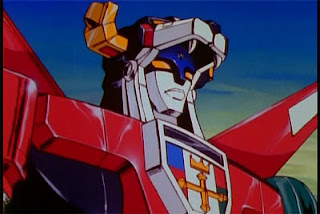 So now that we have established the pilots, what the heck are they flying? Lions. They're flying mechanical lions. And what do flying mechanical lions assemble? A giant humanoid super robot. Perfectly legit, right? Well, that's the advantage of the "super robot" sub-genre of anime - the physics doesn't have to make sense nor be explained so just go with it. Like cosmic inflation of the Big Bang theory violating the speed of light - just go with it.

But please explain how we've had keyless starting ignitions since 1998 yet in the year 21XX the Defender of the Universe still needs one. Go figure. And to boot, apparently you have to talk a giant, technologically advanced machine through the process of its own transformation:

I'm going to go off a limb and surmise that the mechanics of Voltrons transformation will be, ahem, "updated".

The important thing to know is that, traditionally, Voltron has one and only one humanoid configuration that, most importantly, has the Black Lion as the head. The Voltron Force series took liberties for alternate configurations so it remains to be seen what configurations Legendary Defender will have.

But make no mistake, once Voltron was formed butts were being kicked and names being taken as an after-thought.
"Give me the head, body, torso. Voltron!" - David Banner, Voltron historian. I'm not making that up, 3:11 in the video says so: