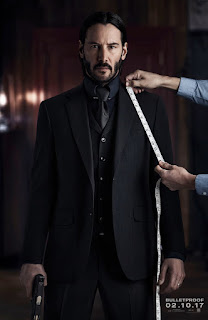 Before I begin this review of John Wick Chapter 2 I have a confession.  I did not watch the original John Wick until it made it to Blu-Ray.  I guess I had seen enough of Keanu Reeves wearing a court suite and fighting waves of minions.  When I first saw the original trailer for the first installment, my conditioned thinking wouldn't allow me to spend date night money on a movie I felt like I had seen before.  Obviously, my perspective changed after the first 10 minutes on my sectional.

Fast forward to this winter when I got my first glimpse of the Chapter 2 trailer and I knew I would not repeat the failure of my past with this character.


For the uninitiated John Wick is a highly skilled assassin deadly with anything from a number two pencil to most small arms.  To the hitman community he is known as the Boogeyman due to his ability to get the job done - often in ways that seem supernatural.  He is fond of dogs, really likes his car, and just wants to live the quiet life of a retired contract killer.  Unfortunately, there are a few skeletons in his closet that call him to action.

This second installment opens with what I'd like to call a re-re-introduction to the lead character.  Everyone's stereotypical bad guy Peter Stormare (Abram) has found himself in possession of something near and dear to Mr. Wick and it is here that the audience is subjected to some basic setup for a back story.  This opening sequence jumps right to action and helps the viewer get quickly reacquainted with our good friend Jonathan.

Following the opening sequence the story jumps right into the primary conflict the protagonist faces.  A retired John is forced to make a decision with dire consequences regardless of what he chooses to do.  Unfortunately the one presenting him with the challenge,  Santino D'Antonio played by Riccardo Scamarico, has no idea the amount of crazy he has unleashed when he gives Wick a little push.

Once things get rolling for John the movie does not disappoint.  Staying true to the original John Wick, the action is frenetic and bloody.  John's hand-to-hand skills still don't put enemies down quickly (he eventually gets the best of his bare knuckle foes), but as soon as that boy grabs a gun - we're talking video game style killing streaks with amazing gun katas, and cringe worthy head shots.

Thankfully, there isn't a ton of dialogue in the movie as the writers know what John Wick is all about - that action.  They even play around loosely with captions and graphics for key dialogue moments.  The graphics are used more as a gag, but due to the dark nature of the character and all the killing, it actually works well and provides a few laughs to break up the parade of death.  The writers take the captions a step further with Ruby Rose's character Ares who is mute (from all indications) and uses sign language to communicate.  Rose's silence proves to be golden for her as it makes her more badass and helps build up anticipation for her eventual scuffle with good ole' John.

The rapper turned actor Common also pops up as opposition for Wick and lets just say he raised his stock as an action actor to a new level.  These two definitely make the movie entertaining and due to interesting turns of events, you get a lot of them going at it.  Their attempts at killing each other are epic; even providing a few laughs throughout the middle of the film.

Wick's background is relatively transparent but there was a subtle darkness to a few other supporting characters such as Lance Reddick's Charon, the concierge at the Continental and the Bowery King played by Laurence Fishburn.  Future films may reveal more of their pasts and how they tie into a much larger organization or reveal multiple assassin circles.

This movie is definitely a must see if you are a fan of gunplay, Ruby Rose, and dogs.  Don't make the mistake I made with the original John Wick.  Grab a ticket and enjoy this one at a local theater.