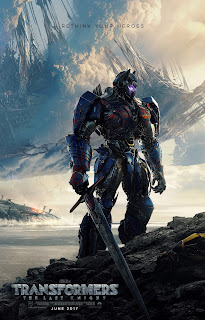 Before I dive too deep into this review allow me to say that if you or your child is only familiar with the live action Transformers movies then completely disregard this review because all is right, from your perspective. But to the many Generation X'ers, Millennials, or anyone familiar with the Transformers: Generation 1 cartoon and beyond, we literally had our hearts ripped out while watching Transformers over the years and The Last Knight was the last straw for me. The Transformers cinematic universe has just been flipped on its head and the next movie could either be the life or death of the franchise - if it isn't already too late. I now see why J didn't want to make this review as the tears are still fresh in my eyes as I type.

Ironically, from the very first live action Transformers, I attempted to witness to many jaded Generation 1 fans that the new movies were cool and didn't shake things up too much. But as the series transitioned from Witwicky to Yaeger it went the way of the Resident Evil series and began to wonder aimlessly for, well, substance. I know some people would stop me here and say 'well wuddabout Fast & Furious?'. At least there's an immediate point to each Fast & Furious movie without it being the end of the world every.single.time. To put it another way, saving today goes a lot further than saving tomorrow for a series' longevity.

Despite the very bad scripted comedy and Transformers looking too human-like in the face, my two biggest gripes with the series is 1) balance: how strong/weak should the Autobots vs the Decepticons or humans vs Transformers, in general and 2) background: what's the point of it all?

While the balance aspect has worked itself out there's still no point to it all after 5 movies. Five. The human role in the Transformer Universe has never been clearly defined other than bad comedy - humans have no real purpose in the Autobot/Decepticon war. But wait, Steve, they're on Earth and humans live on Earth! So what? The vague theme over the run of the series has been "home". The Transformers' home planet of Cybertron has been lost and now humans run the risk of losing their home, Earth. Somewhere in there lies the biggest missed opportunity for the Transformers story - to imagine an Earth with little or no human population as the Transformers new home. But no, Cybertron just won't go away which has made saving tomorrow (or Cybertron) just boring after 5 movies.

Having no point is how writers stretch to tie Transformers to different ages such as Ancient Egypt and Medieval times. Having no point is how Sam Witwicky (Shia LaBeouf) supposedly comes from a lineage of Transformer guardians that wasn't mentioned for 5 movies. Having no point is how Cade Yaeger (Mark Walberg) is "the last knight" with an artifact that does absolutely nothing in the war between Autobots and Decepticons. And, finally, having no point is how big names like Devastator, Galvatron, Nemesis Prime, and Unicron get taken in vain by script writers. (Remember, Devastator was in Transformers as a tank then resurrected in Transformers: Revenge of the Fallen) Now, the story writers have made a bed that they have to lay in by introducing Unicron when all other elements of the Unicron storyline have already been introduced and forgotten in previous movies. Any rational person would say that this is an opportunity for the writers to create a fresh, new story. But fans are not rational, fans are rabid and I'm foaming at the mouth for blood. Steven Spielberg blood.

Primus help us all.