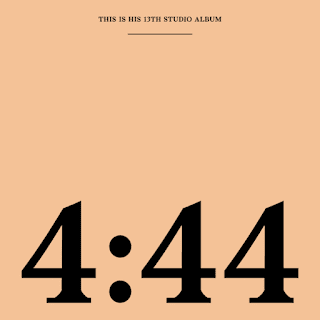 Oh great, another Jay-Z 4:44 album review! Not so fast, this is something much, much worse. This is me (over) analyzing an artist's work to make a very subjective point.

Jay-Z's latest effort, 4:44, struck a chord within me that I've alluded to in a previous post, Steve's Top 5 Esoteric Songs & Albums, where I proposed that Nirvana's song, Heart Shaped Box, was about Kurt Cobain's Anima possession.

But, first, what's an Anima1? And how can it "possess" you? Let me answer the easy question first: "possession" in analytical psychology just means something that you're hung up on; a 'complex', so to speak. Now for the harder question, pioneered by psychologist Carl Jung, an archetype2 is an unconscious concept shared by humanity. And the Anima/Animus archetypes are counter-energies within a person that can mature along with that individual's psyche. The Anima represents the Yin to the Yang or the balancing feminine energy to the dominant masculine energy within men - nothing to do with sexual orientation cause we're all adults, right? Likewise, for women, the Animus represents the balancing masculine energy to their dominant feminine energy within them. Jung identified four major stages of development for the Anima/Animus archetype - Eve, Helen, Mary, Sophia for the males' Anima.

I'm losing you, I can tell, but just hold tight and let's work our way to Jay-Z through Kurt Cobain and Drake, first.

She eyes me like a Pisces when I am weak

I've been locked inside your heart-shaped box for weeks

I've been drawn into your magnetar pit trap

I wish I could eat your cancer when you turn [back]

Kurt Cobain was a Pisces and Courtney Love is a Cancer. So if Pisces and Cancer are Cobain's metaphors for himself and Love then it seemed more/less odd to me that he would address Love in 2nd person with "your" AND refer to her as a Cancer in 3rd person in the very same line. I believe he's getting at something bigger than just Courtney Love's "box" as seen in the next verse:

Meat-eating orchids forgive no one just yet

Cut myself on angel hair and baby's breath

Broken hymen of your Highness, I'm left back

Throw down your umbilical noose so I can climb right back

Cobain is heavy on the juxtaposing feminine symbols and pain - meat eating orchids, umbilical noose, sharp angel hair. And the term "umbilical" is uniquely maternal to which insight into Cobain's early home life sheds even more light on these references. Cobain's parents divorced when he was 9 years old and in his own words the divorce had a profound effect on his life as his mother would eventually give up full custody of him to his father3.

So, if Cobain isn't addressing Courtney Love with the "your's" then who or what is he talking to? I believe he's unconsciously addressing his Anima archetype which would fully encapsulate both Courtney Love and his mother. This would lend to Heart Shaped Box being about Cobain's attachment issues with his mother affecting his romantic relationships. Jung dubbed this stage of Anima development as Eve due to a boy's relationship to his mother/mother figure being his very first encounter with the feminine energy.

I'm almost to Jay-Z but quickly, how would an artist sound if, instead, he was fixated on his own physical desires? Well, that artist would sound like Drake as desire is the next phase of Anima development, Helen.

The women in Drake's music have been mostly nameless and faceless figures from his past that he once projected his idea of the perfect woman onto, with the exception of naming Courtney from Hooters on Peachtree - leave those Courtney's alone! But those relationships didn't work out and Drake has made a career of longing for The One. However, Drake does give names and faces to women he is currently projecting his idea of the perfect woman onto - Maliah Michael, Nikki Minaj, Serena Williams, and Rihanna.  Drake is being driven by his own physical desires in search of his ideal woman. In contrast to Kurt Cobain, Drake is no longer focused on his attachment to his mother like Cobain's "umbilical noose". Instead, Drake keeps that maternal connection in check as heard on tracks like Look What You've Done and You & The 6 where he honors his relationship with his mother but heeds or discards her insight as he sees fit.

Took for my child to be born

See through a woman's eyes

I apologize to all the women whom I

Toyed with your emotions because I was emotionless

This goes beyond Jay-Z attempting to right a wrong. He has an entirely new perspective of women through his wife, Beyonce, and their marriage. Furthermore, he's more embarrassed with the version of himself that made those decision than the actual decisions themselves. 'When you know better, you do better', right? Well, Jay-Z just didn't know better back then and he's saying "how could I have been so stupid?".

I suck at love, I think I need a do-over

Now, you could make the point that not every man has to almost lose his marriage to realize his wife's worth and to which I'd say 'True'. But every man that values his wife doesn't necessarily do so with the conscious introspection that Jay-Z now has and the Kill Jay Z track is testament to that. And no, that's not a pass for his infidelity but that is how he learned the true value of his marriage with Beyonce.

So where does Jay-Z fit in the Anima concept of analytical psychology? Beyond maternal attachments and physical desires lies a form of the Anima that Jung dubbed "Mary", as in the mother of Jesus, in which a man can view women independently of his own notions. At this stage, a man has learned to harness his own internal feminine energy instead of being externally driven to it by overly focusing on his [non]attachment to his mother (Eve; nurture) or his own physical desires (Helen; carnal needs).

So for the 4:44 album as a whole, Jay-Z offers up something I haven't heard in his music: a new perspective. I wanted to quote lines but felt that they lost impact apart from the song. The Story of O.J., Smile, Family Feud, and Legacy are songs where Jay-Z wants you to step back and see a bigger picture and offers up points that are rarely heard in hip hop about finances, community, and same-sex love - a big no no in the homophobic Black community and rap music industry. But he could only be this transparent by having already looked deep within himself, "Your vision will become clear only when you can look into your own heart. Who looks outside, dreams; who looks inside, awakes." – Carl Jung

And there's my subjective point: Jay-Z has navigated the individuation4 process to the point that he's truly woke. So it's not #StayWoke, it's #GetWoke. Something that a 20th century psychologist has been urging us to do for over 100 years. Eat your heart out, #BlackTwitter.

If you made it this far then thank you for reading the ramblings of a mad man who's thought way too hard for too long about this. Here's some links if you want to dig deeper into this aspect of psychology: