No Thanks, and You're Nasty 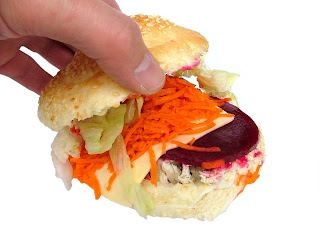 Anyone who knows me personally already knows where this is headed.  In fact, for family and close friends it was inevitable that I would eventually write an article based on this quirk of mine.  Actually, it goes back to a childhood full of misadventures in the kitchens of relatives and family friends.

As a military brat, my family spent lots of time socializing with other families in the neighborhood - mostly due to the close-knit nature of the communities I lived in.  Everywhere I turned somebody was thrusting a random plate of food in my face.  And things only intensified anytime we were in the presence of extended family.  I simply couldn't win.  People wanted to feed me but I simply refused to eat anything my mother didn't cook.

Looking back, I can't quite identify one defining moment - instead, it's more like a series of events that culminated in my current condition.  Maybe it was the morning my aunt grabbed a pan out of the dirty dish water, simply dried it with a paper towel and proceeded to scramble eggs for me or the time my mother's friend reached into her bra for money while preparing lunch.  It never failed, at every turn, I was traumatized by nasty cooking habits.

So as you might imagine, I had to come up with a solution to avoid ingesting food that was prepared in questionable ways.  As a kid I had no power and had to be quick on my feet.  Not only did I need to outsmart the cook that just grossed me out, I had to leverage my parents to back me in my claims.  Simply telling the adults I didn't want to eat something was not acceptable.

It took a few attempts but eventually I realized that paying close attention to my parents' social trends would allow me to prepare my excuses in advance.  The moment I felt a social engagement with food was around the corner, I would eat at home just before we all left or before guests arrived with food.  Then when I was asked why I didn't grab a plate, I wouldn't be lying when I said, "I wasn't hungry."  Pretty crafty huh?

So why am I sharing this?  It's simple, I wasn't empowered to say "No thanks, and you're nasty."

Now that this is off my chest, I simply want to say to anyone who offers me food - it's not your fault.  Please don't take offense.  It's not personal, but on the off chance that you licked something from a spoon and stuck it back in the pot or played with your dog and didn't bother to wash your hands before returning to cooking I have only one response for your food offering.  Can you guess what it is?

Steve's Note: J is the most germophobic person I know. He will smack your wrist if you reach for the refrigerator door without washing your hands and he thinks his hand sanitizer is lotion! But ironically, J is also one of the most sickly dudes I know too. He stay having the bubble-guts despite being so particular about his food prep lol. J was probably the kind of kid who refused to eat breakfast gravy made with last night's grease. His lymph nodes went on strike cause he outsourced his bodily defenses to Lysol. J, eggs scrambled in a pan out of dirty dish water would have done you more good than bad. I'll give you a pass on the cocaine residue breast sandwich only because you probably thought the opposite sex had cooties. Stay well homie!