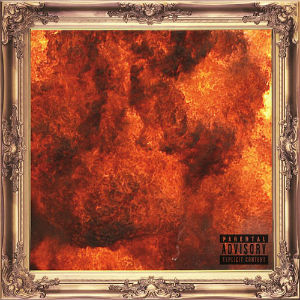 I was depressed not even 2 weeks ago that I didn't have any new music to pump in my earbuds while pumping iron because music is my crack; I need it. But low and behold my latest favortie artist, KiD CuDi, to the rescue with his 3rd major release, Indicud. Slated at first for an April 23 release date, the album dropped April 16 after the (why act surprised) 'album leak' that's become a fixture in the era of digital music.

Cudders is just that cat I (chose to) identify with via music. From Man on the Moon:The End of Day to Man on the Moon II:The Legend of Mr Rager Scott Mescudi has been figuring out his own path in life and his music has been my soundtrack as I figure out mine.

The next step for CuDi is Indicud which revealed a more confident and extroverted Scott. There was less emphasis on interpersonal and personal life issues and a lot more of self assertion - ironically where I also find myself these days.

Indicud doesn't have the storytelling feel of Man on the Moon I and II but it's no less enjoyable. After the first 2 listen-throughs I just put whatever track on repeat depending on my mood. I hop outta bed to Just What I Am, relax post-workout to Red Eye, and cruise ATL on the ZX12 to Girls. The hook to Unfuckwittable will be my mantra for the next few weeks while King Wizard or Young Lady put me to sleep.

CuDi reached out more on the collabs with Indicud hooking up with RZA and Too $hort while crossing genre-lines with Father John Misty on Young Lady and Micheal Bolton on Afterward (Bring Yo Friends). Of course Chip Tha Ripper, know known as King Chip, blessed a few tracks along with freshmen class Kendrick Lamar and A$AP Rocky.

I can't wait to throw Indicud in the playlist while ripping up the interstate on the 12. It's going to be a good summer.