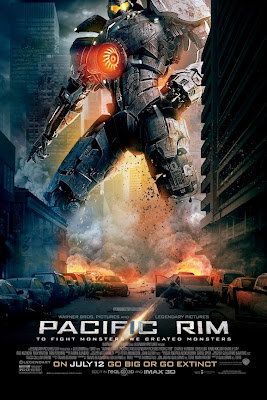 Do you know what the success or fail of Pacific Rim at the box office means? It holds the future of live-action Mecha movies in the balance! Robotech, Gundam, Voltron, Aquarion, and the list goes on!

Here's the rundown: Aliens, dubbed "kaiju", from another universe emerge from a trans-dimensional breach in the Pacific ocean and lay waste to coastal cities. The world's governments work together to build a unit of giant robotic soldiers, Jaegers, controlled by the neural impulses of two pilots using "Drift" technology. But when the attacks escalate and as more pilots are killed former ranger and Jaeger pilot Raleigh Becket (Charlie Hunnam) must suit up again to make one last stand against the coming extinction.

Giant Robots + Giant Aliens = Dopeness, absolute dopeness! Or |Dopeness| for you math geeks. And for the record there was more "suit" in Pacific Rim than the entire Iron Man franchise! (I'm looking real hard at you, Marvel Studios!)

I know quite of few people personally that were on the fence about this movie so to them and to those reading who are I assure you that you will not be disappointed. And if giant robots aren't your thing then you're not reading this post anyway so I can crack ungracious insults and you'd be none the wiser.

Pacific Rim redeemed the first half of this slow 2013 blockbuster season for me so hopefully this is only the beginning of the live action Mecha genre in the American box office! Only Man of Steel is worth mentioning this summer while I've had to get my kicks from outside the action genre from flicks like The Purge. But if Iron Man 3 was rock bottom then Pacific Rim is a helluva leap up! Now here's looking forward to The Wolverine!

Movie Moment of Zen:
Hearing Imagine Dragon's "Radioactive" during all the action sequences