Album Review: Nothing Was the Same I've never cared to buy a Drake album because I only like rapper Drake (the Drake that gets played in stripclubs), not Drake the crooner. So after going 0-2 on Drake albums I decided to pick up his 3rd major release, Nothing Was the Same, out of morbid curiosity after I scrolled past the following facebook status:


"listening to drake's album. I feel all frilly inside. I need a glass of white wine and an open field to frolic in. I'm going to put it on repeat and pick some flowers. I don't ever wanna lose this feeling." (Sean F.)

If crooning R&B/Rap is your thing then buy the album. But for me, personally, it's way too early in #CuffingSeason for this shit - I'm still Summer-Stuntin'...sort of. Late October/early November would have been a better drop date to coincide with Marvin's Room Week but no shade though because I definitely dig the (few) rap songs on the album. And speaking of which, "Worst Behavior" is my new personal anthem.


"who else makin' rap albums doing numbers like it's pop?"

Wait, this was a rap album? Lolz! No shade though cause I still have a day-job.

It's been a while since I heard some decent word play. I need to revisit some De La, O.C., or Killah Priest even.

All in all, I don't think I wasted my money on Nothing Was the Same but that's probably because I'm halfway cuffed.

If a review for this album could be summed up in 1 picture it would look exactly like this: 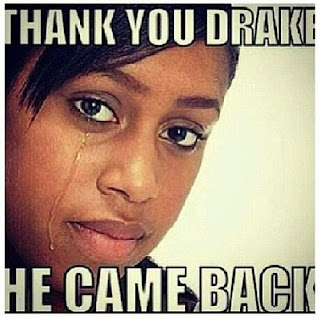