On the TLC Tip 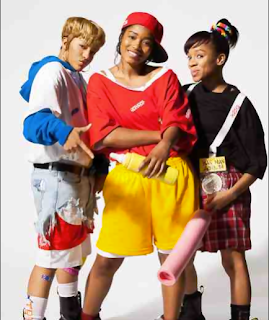 So I will keep this simple...  I totally missed the premier of the Bio Pic, Crazy, Sexy Cool: The TLC Story, and just had a chance to watch it tonight.  All I have to say is WOW!  If you haven't had a chance to catch it, you can find it in VH1's rotation on any given night and I must say, it is a must-see.
Yes, the acting is a bit campy at times, but Lil Mama earned my respect as an actress in her portrayal of Lisa "Left Eye" Lopes.


The story itself shares the groups origins, failures and triumphs.  It also reveals the finer nuances of the members' personal and professional relationships in a manner so scripted that its hard to believe these events really took place.  The groups mantra of "Meant To Be" proves to be ironic as their experiences almost seemed pre-ordained to be told in story fashion.

Considering how much time has passed; I had forgotten what drew me and countless other members of my generation to this group in the early 90s.  The moment the camera cut to Lil Mama, I remembered that I had fun watching TLC have fun.  They represented me and my friends from their clothes to their antics.  They also represented a time when cameras seemed to be around every corner and MTV was in its heyday as a media outlet for all things entertainment.  They were hip-hop rock stars.

I promised I would keep things simple and I will.  If you lived in the 90s watch this movie!  You won't be disappointed.

Kudos to the cast as they effectively pulled off roles that were probably too big for VH1 when you consider the cultural impact T-Box, Left Eye and Chilli had on the world.  This movie actually has me looking forward to new music from the group and I can only hope that they have the same impact on the world as they did a decade ago.