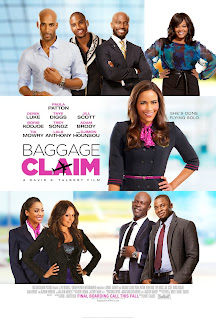 Baggage Claim hit theaters this weekend kicking off a 4th quarter at the box office that will have as many as 3 movies with mostly Black casts. I'm not prejudice, just partial, I swear. Now the business:

Flight Attendant Montana "Mo" Moore (Paula Patton) is about to be beaten to the altar by her little sister, Sheree Moore (Lauren London). Desperate (to put it lightly) to have a date for the wedding, her coworkers Gail (Jill Scott) and Sam (Adam Brody) devise a plan to book her on any/all flights that her exes are traveling on in hopes of re-kindling an old flame. Comedy ensues as Mo jumps through hoops, airport gates, and into trash cans in search of love.

The most painful thing about watching Baggage Claim was the friend-zone connotation of the movie and the false hope given at the end. Us fellas that live in the real world know better, or you should.

But I digress, it was great to see a solid movie with so many Black faces (did that come out right? And I'm not prejudice, remember!). My first impression before seeing the movie and only lament would be to cast the new faces of Black Hollywood but that was long forgotten once Jill Scott shot her bust toward the camera. Just saying. And while we're on Jill, she was hilarious. I wished they hadn't turned her character down (fuh whett!?) but hey, there was a movie going on.

Movie Moment of Zen:
"I don't even trust Black republicans like that." - Mo