I'm not going to insult your Googling capabilities by copy-pasting Steve Young's bio from Wikipedia but if you listen to classic rock such as the Eagles then Steve Young is someone you know that you don't know you even know. The Eagles sung a song live song titled "Seven Bridges Road" which, depending on the recording, they introduced as a song they "learned from a fellow named Steve Young". Yup, this is that Steve Young. 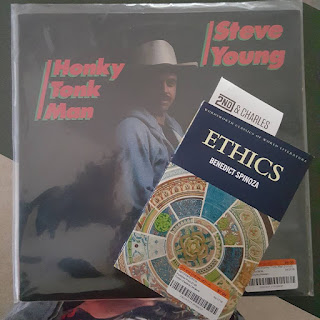 On April 10, 2016 I posted this pic on my instagram. I was on top of the world that after years of crate digging in Georgia and North Carolina I had finally found an LP by my favorite (read: ONLY) country singer. And upon searching his #SteveYoung topic on the gram I was immediately brought back down from cloud 9 after learning he had passed on March 17, barely a month before.

I was legit sad and taken aback. I wasn't a country fan but I was definitely a Steve Young fan. Being big on finding the origin of a work, I made it my personal mission to seek out his music ever since I heard the Eagles name drop him the first time I heard Seven Bridges Road on satellite radio while working at Kroger in 2006. Starting with his Rock Salt and Nails LP, I went on to hunt down more of his music via mp3. And like any good music that can get you high, Steve Young also helped me in a low. Grieving my father's death, his lyric from Holler In The Swamp turned the following family reunion from somber to joyful:


Did you think I began to hear that laughter and still be cold inside my soul?

And that's what made April 10 such a great day - I had finally placed hands on a physical copy of his music.

Email ThisBlogThis!Share to TwitterShare to FacebookShare to Pinterest
Labels: Entertainment, Off the Record